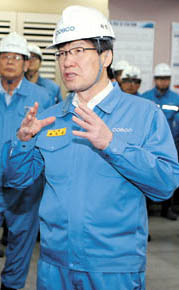 Posco Chairman Kwon Oh-joon has been traveling abroad in hopes of exporting the steelmaker’s technologies.

Kwon said he realized that the technologies and know-how that the Korean steel company has accumulated over the last 47 years since its founding in 1968 wasn’t “rusty” and, in fact, is cutting-edge compared to the competition.

He said Posco technologies are drawing a lot of interest from major steel manufacturers in advanced economies, including the United States and Japan.

“It seems our own independently developed technologies such as FINEX, which is the result of our continuous efforts in research and development over the past 20 years, are highly recognized,” Kwon said. “The most rewarding moment since I joined the company was when Posco started to focus research and development on types of steel that will be used in vehicles in the 2000s. This is an area that will continuously generate profit for the company.”

Kwon joined the nation’s biggest steelmaker in 1986 and has worked mainly in the research and development department. He was the first chief technology officer of the company to be named chairman.

He said the only way for Posco to recover from recent negative publicity that resulted from an investigation by the prosecutors’ office over alleged business malpractices, including resources diplomacy during the Lee Myung-bak administration, is to reignite its “startup mentality.”

He said many consider the steel industry an outdated, bricks-and-mortar kind of business.

“But such a view is a mistake,” Kwon said. “A country can exist when it has a steel industry, and steel will continue to be the foundation of Korea’s industrial development through continuous development of technologies.”

That is one of the reasons Posco has been focusing on developing technologies that will reduce carbon emissions. Kwon wants to take the lead on environmentally friendly technologies, which will remain one of the biggest issues in all industries for centuries to come.