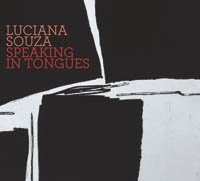 Luciana Souza has always emphasized her skills as an interpreter of lyrics - whether singing Brazilian bossa nova classics in her native Portuguese or American jazz standards in her adopted English.

But on her new album, “Speaking in Tongues,” produced by her Grammy-winning husband Larry Klein, the genre-bending singer largely does away with words and instead uses her voice as an instrument on a collection of original music. She builds on a tradition of wordless singing in both jazz and Brazilian music - from Ella Fitzgerald and Bobby McFerrin to Milton Nascimento and Sergio Mendes’ Brasil ’66.

Offering a contrast are the only two tracks with lyrics - Souza’s hauntingly sparse musical adaptions of two Leonard Cohen poems, “Split” and “No One to Follow.” AP