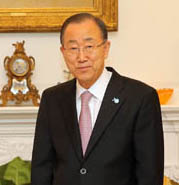 President Park Geun-hye’s frequent meetings with United Nations Secretary General Ban Ki-moon reignited speculation that the senior diplomat will begin a political career in Korea following his UN tenure by running in the next presidential race.

During a recent four-day trip to New York, Park met with Ban seven times. Park arrived Friday in New York, where she started her official itinerary with a 20-minute closed-door meeting that followed with a dinner.

The two leaders met again throughout the UN events, including at the UN General Assembly and a high-level Saemaul Movement conference hosted by the Korean government, the UN Development Program and the Organization for Economic Cooperation and Development.

During the conference on Sunday, Ban issued particularly high praise for the Saemaul Movement, an initiative to modernize Korea’s rural economy that was pushed forward in the 1970s by the late President Park Chung Hee, the father to the current president.

After Ban’s speech, Park reportedly expressed appreciation for his support.

The encounters between Park and Ban fueled speculation that ruling party officials - namely, Park loyalists - are trying to convince the senior diplomat to run in the 2017 presidential race. Suggestions over Park’s support for Ban as a presidential candidate started even before she left for New York.

Ahead of her trip, the Blue House briefed reporters about her schedule, during which Joo Chul-ki, the senior presidential secretary for foreign affairs and security, made a rare and conspicuous comment that, “The president will meet with Ban several times officially and unofficially.”

Yoon Tae-gon, a political analyst at the MOA Agenda & Strategy Group, questioned on Friday in an interview with the SBS radio why the president would meet Ban in that fashion. “This is an advertisement that they are having closed-door talks.”

Yoon added that the announcement was political PR to arouse public curiosity about whether the two had discussed the presidency.

“Ban only said he will be faithful to his UN tenure and he has no time to pay attention to Korean politics, but he never said he wouldn’t run,” the analyst said.

Lee Sang-don, a professor emeritus at Chung-Ang University, also said in an interview with CBS on Sept. 21, that Park and Ban had probably exchanged their thoughts last month when they met in Beijing. Ban and Park both attended the Victory Day events hosted by China on Sept. 3.

Ban has consistently ranked as the most favored presidential candidate in the polls.

In another poll, released by Media Research on Sept. 8, Ban was ranked as the most favored presidential candidate, with 27.6 percent, while Kim had 13.7 percent.

While Kim was long seen as the frontrunner among conservative presidential contenders, his often troubled relationship with the president and Park loyalists prompted the Park faction to search for a new face. Tensions between Kim and Park reached new heights this week, after he agreed Monday on open primary rules with Moon, without consulting the president.

In an interview with the Chosun Ilbo on Sept. 15, Saenuri Rep. Yoon Sang-hyun, a special political adviser to President Park, said Kim is not enough for the party to win the next presidency.

“He is a precious asset in our party, but it is unfortunate that his rating is only about 20 percent while the party is recording 40-percent support,” he said.

He added that it was necessary to diversify the Saenuri’s presidential contenders. “There are other people from Gyeongsang and Chungcheong who can run,” he said.

Ban is a native of Eumseong, North Chungcheong. His tenure as UN secretary general will end at the end of 2016, just a year before the election.