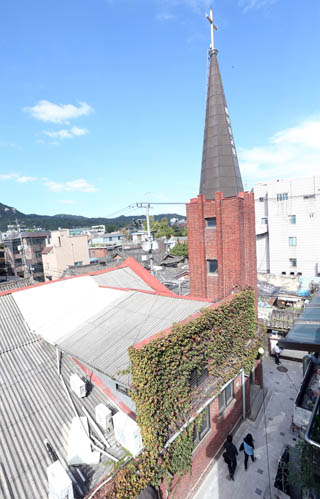 The exterior of the Chebu-dong Holiness Church in Seochon, west of Gyeongbok Palace in Seoul By Kang Jung-hyun

Seoul Metropolitan Government has decided to buy the Chebu-dong Holiness Church, a historic brick building that was about to be sold to a Chinese businessman and possibly demolished for private benefit.

The church, located in the center of the capital, is currently a provisional candidate to be named a future cultural asset.

“Our plan to buy the church for 3.8 billion won ($3.2 million) passed the investment assessment in August,” Kang Seok, who heads the city government’s Cultural Policy Division, said on Sept. 17. “We are planning to conclude the contract early next year and register it as a future cultural asset for Seoul.”

The Chebu-dong Holiness Church is in the middle of Seochon, west of Gyeongbok Palace. Among restaurants and bars, mostly two-story buildings, it is easily identified by its tall steeple.

The 85-year-old church is recognized for its historic importance because it demonstrates a rare case in which multiple styles of brickwork were used in the same building.

When the small oratory was extended into a church in 1931, it was built with what is called a Flemish bond by Western missionaries. After Korea was liberated from Japan in 1945, the church was again extended in a different style, English bond. Eventually it was remodeled in the style of Stretcher bond.

It was July 2014 when the church’s management first notified the city government that it was willing to sell the church for a public appraised value of 2.6 billion won, citing a decrease in the church’s congregates following the region’s gentrification.

“When we tried to sell it initially, a Chinese businessman said he would buy it for 5 billion won, and I thought the church would be easily demolished,” said Yeom Hee-seung, the church’s pastor. “We thought we should sell it to a public organization to preserve it.”

As the city government mulled it over, the JoongAng Ilbo reported on the case, which sparked public outrage over the fact that the church would be sold off or torn down.

After buying the church, the city government plans to remodel it as a practice venue for amateur orchestras by the end of next year. It will also offer music lessons to residents.

The church’s remodeling plan is also in line with the city government’s efforts to establish what is known as the Seochon Art Belt, a tour program that includes artist residences.

“Low-ranking civil servants who lived in Seochon lost their jobs during Japan’s colonial rule over the peninsula and often ran boarding houses,” said Prof. Jeon Wu-yong of the Institute for East Asian Cultures at Hanyang University. “Poor artists began to live there and it became a place for artists to gather together.”

Lee Chang-hak, who heads the Seoul government’s Culture, Sports and Tourism Headquarters, added, “Remodeling the church and providing it as a practice space for civic orchestras goes along with this ‘up-cycling’’ trend, wherein buildings are reused for other purposes. Buying the church will initiate the city government’s efforts to tie all Seochon’s cultural assets together.”