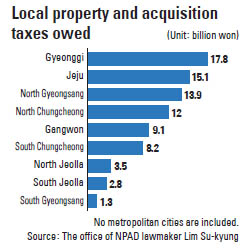 A government report submitted to the office of New Politics Alliance for Democracy lawmaker Lim Su-kyung shows that a number of golf courses have failed to pay their taxes.

The accumulated local tax discrepancy for all golf courses nationwide was confirmed to be around 83.7 billion won ($70.9 million) as of September, according to the report, “Present Tax Conditions for Golf Courses in 17 Cities and Provinces.”

The document was submitted Tuesday by the Ministry of Government and Home Affairs to Lim.

Gyeonggi, where most of the nation’s golf courses are located, has the largest amount of debt at 17.8 billion won. Jeju Island (15.1 billion won) and North Gyeongsang (13.9 billion won) came next. The list did not include golf courses in Seoul, Busan or Daegu.

One of the biggest reasons that the golf courses have failed to pay their taxes, the report said, is due to the decline in customers, which has hurt their finances.

The increase in the new golf courses launched compared to the number of new golfers has also led to losses.

Some golf courses are even participating in debt-restructuring programs. Three golf courses in Gyeonggi, including a golf course in Namyangju, are overseen by an administration.

And one golf course in Chilgok County, North Gyeongsang, failed to hand in 4.7 billion won in taxes, including accumulated local taxes since 2012 and a fine for default.

But even though the local government attempted in May to auction the land to make up for the deficit, the deal was abandoned due to a lack of interest from buyers because of its lack of profitability.

Those in the golf industry claim that the high tax rate for running a golf course is the key reason why so many operators fail to pay up. They are required to pay the government 4 percent of the original value of the land as possession tax, which is about four times higher than what a company pays for property tax and comprehensive real estate holding taxes combined.

Choi Mun-hyu, the chairman of the Korea Golf Culture Forum (KGCF), stressed the need to lower taxes, saying golfers were required to pay some 24,000 won as individual consumption tax and special rural development tax - four times what is typically required from a casino.

“As golf has become commercialized, the amount of taxes collected from these business should decrease,” he said.