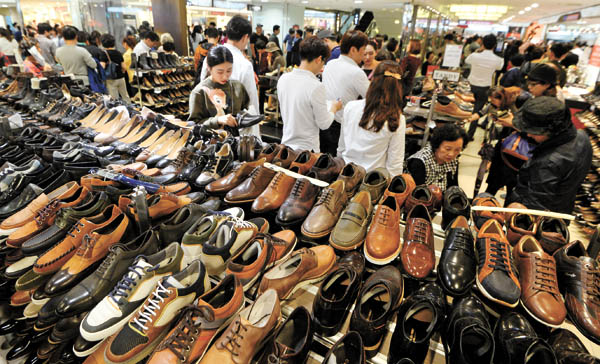 The Black Friday Sale has turned out to be a bit of a white elephant for some shoppers.

Promoted as a major discount shopping period on par with Black Friday in the United States, sales failed to attract many bargain hunters.

On Thursday afternoon, the launch day of the two-week government-led event, about 50 women gathered around a sales stand on the third floor of Lotte Department Store, choosing which t-shirts, sweaters and winter coats to buy. However, their search for a bargain proved futile.

“I dropped by the department store thinking of getting my daughter shirts for the autumn season seeing news that Lotte was offering discounts up to 60 percent,” said a middle-aged woman on the escalator who asked not to be named. “But [the discount] doesn’t seem to go as far as that level. I don’t think I’ll buy one if the discount is just the same as a seasonal bargain sale event.”

An office worker surnamed Shin said, “I’ve visited the department store to get a pair of shoes, but I simply decided not to buy because the discount rate was only about 20 percent. I would rather buy them at outlets or an online open market where the same products are offered much cheaper.”

Parts of the floors in the department store with fashion products and cooking utensils, where the discount rate was high, were crowded.

Local young fashion brands like Soup and On&On offered discounts of up to 80 percent on last season’s products and up to 40 percent on this season’s new products. Local and foreign brand cooking pots, frying pans and dishes from Le Creuset, Tefal and Queen Sense were offered at discounts near 30 percent.

However, luxury handbags, shoes and electronic products such as home appliances and PCs were much less crowded, as consumers found the discount rate was similar to what was offered regularly after every Chuseok holiday season. Discounts of up to 70 percent were available only on last season’s products.

The first floor of the store, where none of the cosmetics brands offered a Black Friday discount, were empty, except for some walkthrough customers.

“The floor is more crowded than usual afternoons on business days because it’s the first day of the Black Friday Day sales period,” said a salesperson at the Lotte Department Store Yeongdeungpo branch. “But I wouldn’t say it’s special because we see more crowds usually on the first day of regular bargain sale periods.”

Discounts ranged from 50 to 80 percent only on last season’s products.

The Ministry of Trade, Industry and Energy launched the event as part of the government’s attempt to revitalize domestic consumption sentiment. It said Hyundai Department Store was offering a discount of up to 80 percent on some 100 products and Lotte offering discounts of up to 70 percent.

“The Black Friday Day event in Korea is more like a focused discount week happening in the middle of the Korea Grand Sale event, another government-led discount event period offered at local retail chains, considering the upcoming Chinese National Day holiday,” said a civil servant at the ministry.

“It’s been designed by the retailers themselves to offer additional discounts of 5 to 10 percent on brands already on the Korea Grand Sale discounts. The government can’t push the private sector retailers to raise discount rates.”