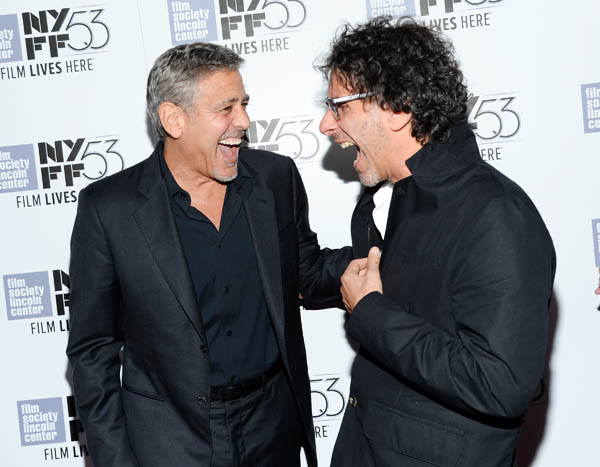 Actor George Clooney, left, talks with director Joel Coen on the red carpet before a special 15th anniversary screening of, “O Brother, Where Art Thou?” during the New York Film Festival at Alice Tully Hall on Sept. 29 in New York.[AP/NEWSIS]

Clooney remembered he had just left a successful television series when the opportunity came up.

“Listen, I was an actor coming off of ‘ER,’ so the idea that the Coen brothers said, ‘Do you want to do a movie?’ And I was like, ‘Yeah, I’ll do a movie with the Coen brothers, are you kidding? They do great films.’ I just couldn’t believe my luck,” Clooney told The Associated Press Tuesday night after arriving at the event.

Clooney admits he felt a geographic familiarity with the characters.

“I grew up in Kentucky, and I kind of know these guys a little bit,” he said.

Ethan Coen and his brother, Joel, wrote the screenplay, based on “The Odyssey” by Homer, and directed it. Ethan talked about what inspired them to make the movie.

“I tracked it through Tim Blake Nelson and George Clooney, and I have no idea why that struck us as funny or appealing, but it did.”

While the film was critically acclaimed and enjoyed moderate success, the soundtrack was a smash hit.

Produced by T Bone Burnett, it was made up of artists from the American roots music scene that included Alison Krauss, Ralph Stanley, Gillian Welch and Emmylou Harris.

It sold 8 million albums and earned a Grammy Award for album of the year.

“It had a really lasting quality,” Clooney said.

Coen loved how the music and the film unexpectedly came together, but also discussed the tricky marriage of the two.

“It works well together, when it works. And we’ve always been enthusiastic about certain kinds of music, like the music in this movie,” he said.

“It’s kind of American roots music and the music of ‘Inside Llewyn Davis,”’ which Coen said is kind of a descendent of that.

One of the biggest hits from the film, “I Am a Man of Constant Sorrow,” sung by the fictional Soggy Bottom Boys, which included Clooney, Blake-Nelson and Turturro, does not include Clooney’s voice. It was actually bluegrass musician Dan Tyminski.

Clooney told reporters he originally recorded the track, but after he came out of the recording booth, producer Burnett just put his head down and looked away.

Clooney said he knew at that moment his voice was getting dubbed. AP