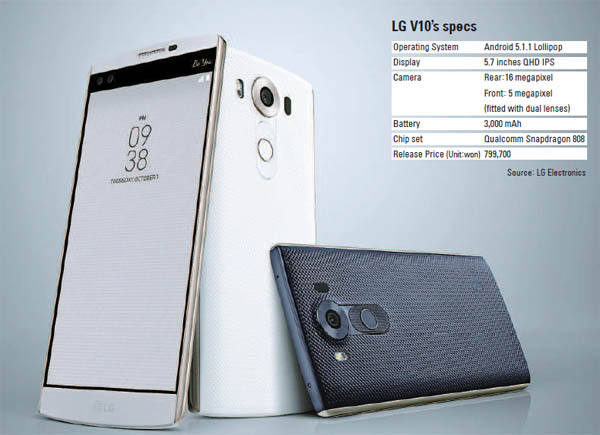 LG Electronics is hoping its latest V10 model will win back market share from Samsung Electronics and Apple with its enhanced features - and cheaper price.

The new device that was unveiled on Thursday sports a number of new features, including secondary displays, two front-facing cameras and revamped video functions.

A major feature of the device is a secondary ticker display at the top of the screen. The screen allows quick access to customizable alerts and favorite contacts. On the side, the screen can show email, texts, missed calls and app activity.

Another addition is the dual camera lenses - a standard 80-degree lens and a 120-degree wide-angle lens - within the front facing camera.

Despite the new features, V10’s chipset is not top of the range, as it uses Qualcomm’s Snapdragon 808 processor instead of the faster and newer 820.

For video recording, the V10 is fitted with a professional manual mode that allows users to manipulate the white balance, ISO and shutter speed.

However, what will likely draw most attention from buyers looking for a premium phone is the price. At 799,700 won ($678), it is one of the lowest-cost high-spec phones on the market.

Many of the premium smartphones from LG, Samsung and Apple range between 800,000 won and 900,000 won without a two-year contract.

Cho Jun-ho, the president and CEO of LG Electronics who oversees the mobile communications division, explained the pricing is designed to target a broader user base.

“We figured that consumers have become more cost-conscious when buying smartphones,” he said, “We made efforts to lower the prices as much as we could to make more people experience the V10.”

Analysts said sales of LG’s new G4 are underwhelming, though the company has not revealed official figures.

LG Electronics’ second quarter operating profit halved to 244 billion won from 610 billion won in the same period a year earlier, reinforcing the view that the G4 flopped in the
market.

Concerns over the lower-than-expected performance are reflected in the stock market, as LG Electronics shares fell below 50,000 won on June 25 for the first time in eight years. It has now fallen further to the 40,000 won mark.

“We will release a premium-level smartphone more often than before,” Cho said.

“LG typically unveiled one premium phone per year, but we will bring up two for a year,” he said. “We will also focus on advancing specs on mid-range phones because they serve as a foundation for further sales. ”

The phone’s frame is made from what LG calls Dura Guard, a silicone-like material that can absorb shock when the phone is dropped.

In LG’s home turf, only three colors - white, blue and beige - are available, while black and opal blue can be bought in the U.S.

The LG V10 has a 5.7-inch 2560 by 1440 quad-HD main display. It is equipped with a 16-megapixel rear camera with dual-LED flash and laser autofocus and 5-megapixel front camera. It is powered by 3 GB of RAM, including 64 GB of internal storage and a micro SD expansion slot.

The V10 phone will go on sale later this month in Korea and next month in the United States.