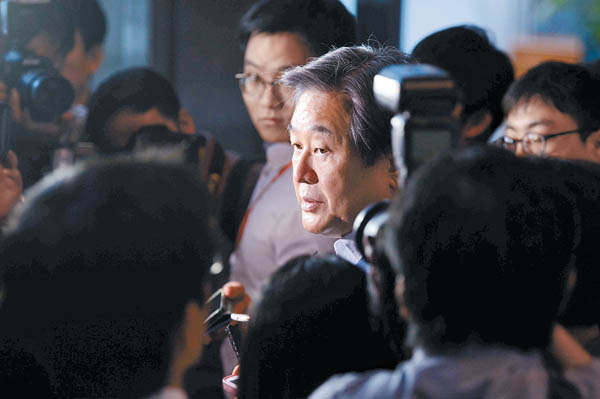 Saenuri Chairman Kim Moo-sung leaves the National Assembly on Thursday, surrounded by reporters who barrage him with questions about the schism with the presidential office. [NEWSIS]

The chairman of the ruling party struck back at the office of President Park Geun-hye on Thursday for its attack on his deal with the opposition on primary rules for the next general election, revealing that he had consulted one of Park’s aides about it.

“Before the chairmen of the ruling and opposition parties met [on Monday], I informed the Blue House about it,” Kim Moo-sung, chairman of the ruling Saenuri Party, said on Thursday. “I was not seeking its consent or refusal, but I consulted with the Blue House about the direction that I was going. After an agreement was reached, I took a photo of the entire transcript of the announcement and sent it.”

Kim and Moon Jae-in, chairman of the main opposition New Politics Alliance for Democracy (NPAD), agreed Monday to revise the election law to include primaries open to the public for next April’s general election. It would be the first time the two main parties hold primaries with the same rules.

A key part of the agreement was that the primaries would be telephone polling of the general public using so-called “secured numbers.” Basically a security arrangement, mobile carriers convert actual phone numbers of customers into virtual numbers and provide them to political parties for polling. This is supposed to prevent the party from using phone numbers of known supporters.

On Wednesday, the Blue House criticized Kim for making the arrangement while Park was in New York attending United Nations events. A senior presidential aide said such telephone polling can be manipulated by political parties and will fail to reflect public sentiment accurately.

“I am revealing that I informed the Blue House in advance because I feel frustrated about the situation,” Kim said on Thursday. “They are criticizing me as if I did everything on my own. As a chairman of a political party, I will accept any criticism. But if the criticism is based on groundless or distorted facts, it will hurt the party. Then, we will struggle in the election.”

Kim, however, refused to say whom in the Blue House he consulted about the primary agreement.

He issued a warning to the presidential office to stop intervening in his plan to change the nomination process because unity within the Saenuri Party is important to win the next general election, particularly considering internal schisms in the main opposition NPAD.

“It’s a simple formula that we will win if we are united,” he said.

Kim also adamantly repeated his position that all candidates of the Saenuri Party will be selected through primaries and no so-called strategic nominations will be made in backroom deals.

Both the Saenuri Party and NPAD want the primaries based on public opinion polls because the process will be considered more transparent and favor newcomers and people already popular with the public. In the past, the nomination process was one of the sleaziest parts of the Korean political system and voters often disapproved.

In a protest of the Blue House’s behavior, Kim canceled his entire schedule Thursday. He was supposed to host a Supreme Council meeting for the party and attend an Armed Forces Day ceremony. Later in the day, he was scheduled to attend the opening of the Busan International Film Festival.

Park gave a speech at the Armed Forces Day ceremony, and anticipation was high that the two would meet at the event. While Kim skipped it, his NPAD counterpart Moon attended the celebration.

The Blue House refrained on Thursday from launching another attack on Kim, although it admitted to Kim’s account of prior consultation about the primary plan.

“The senior secretary of political affairs [Hyun Ki-hwan] met with Kim on Saturday, and Kim told him that he would meet with Moon and explained his plan,” the official said. “Hyun told Kim there were many concerns about the plan and expressed his opposition.”

The official said Kim also informed Hyun about the agreement on Monday after his negotiation ended with Moon. “Hyun, however, did not brief the president, because her UN schedule was so tight,” the official said.

The official stressed he had no intension of attacking Kim. “If we comment on this every day, it will give the perception that the situation is being escalated,” he said.

The Blue House’s criticism of Kim, issued on Wednesday only five hours after Park returned from New York, was seen as a rare and blunt attack on the ruling party chairman, but Park loyalists and Blue House officials said it was necessary. They said Kim’s plan to hold open primaries for all districts using telephone polling threatens Park’s governance strategy entirely.

For Park to successfully wrap up her main agenda, National Assembly support is critical, they said, and increasing the number of lawmakers loyal to her in the next general election is necessary. They particularly said reinforcement in Daegu and North Gyeongsang, the political stronghold of the president, is important.

Kim’s open primary plan gives no room for political maneuvering for the president because the party will not make strategic nominations, which would have put bigwigs in crucial races to ensure they win.

“Kim knows this, but he still reached an agreement with the opposition chairman and made a surprise announcement,” a former Blue House secretary said. “This is a kind of mutiny. This is an act of populism for his presidential ambition.”

Kim aides, however, said his primary plan was intended to help win the general election, not weaken the president’s power. “Strategic nominations are also a great way for Kim to give key constituencies to his people and control the party ahead of a presidential primary,” a Kim ally said. “He gave up that power to bring a victory to the party.”

Political analysts said Park knows better than anyone the power of handing out nominations. Before the 2012 presidential election, then-President Lee Myung-bak handed over the nomination rights to Park, the ruling party’s acting chairwoman, and many Lee loyalists lost their electoral districts.

About 10 to 16 former and current Blue House aides are rumored to have ambitions of becoming lawmakers in the next election.