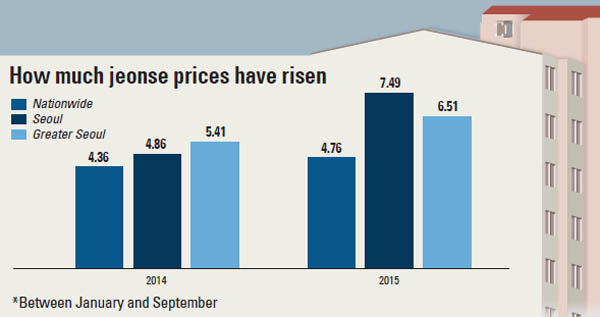 According to KB Kookmin Bank’s report, jeonse prices of apartments across Korea as of September have grown 4.76 percent, compared to last year’s annual growth of 4.36 percent.

By district, Seongbuk District saw the sharpest growth in overall jeonse prices at 10.65 percent, followed by Gangseo District’s 10.56 percent. Gangdong and Yeongdeungpo Districts both grew more than 9 percent, while Dongjak, Mapo and Songpa Districts all grew more than 8 percent.

Among the 25 districts in Seoul, Jongno District had the lowest growth, at 3.59 percent.

The jeonse prices in the greater Seoul area, including Incheon, saw an average 6.51 percent increase.

The ratio of jeonse prices to sales prices of apartments has also continued to rise.

In August, jeonse prices were 72.4 percent of the sales price throughout the country on average. That figure inched further up in September to 72.9 percent.

In Seoul, the overall jeonse-to-sales-price ratio was 71.8 percent last month, up from 70.9 percent in August.

The ratio in the greater Seoul area was also 72.9 percent, while other major cities - Busan, Daegu, Gwangju, Daejeon and Ulsan - saw their ratio hit 72.6 percent.

“Fall is the popular season for moves, and the current situation - in which the number of jeonse apartments has been shrinking as the number of wolse [monthly rent] apartments keeps growing - has been getting worse,” said Lim Hee-yeol, head of KB Kookmin Bank’s value evaluation
department.

“Due to the shortage of jeonse apartments, the increase in jeonse prices are going up regardless of the size of apartments.”

According to a study by the Korea Appraisal Board, the sales and jeonse prices of standalone homes have been gone up in September, bouncing back from declines in July and August.

The jeonse prices of standalone homes saw the strongest growth in Seoul. When compared to August, they grew 0.67 percent, while Daegu trailed behind with 0.64 percent. Gyeonggi came in third, with 0.57
percent.

In Seoul, Nowon District - which struggles from a shortage of jeonse houses - saw the sharpest price increase, at 1.56 percent.

Gangdong District in southeastern Seoul saw the second-sharpest increase, at 0.93 percent, because the neighborhood is being flooded with residents relocating from other areas nearby.

In Gyeonggi, Ilsandong District in the city of Goyang saw the biggest increase in jeonse prices, at 1.56 percent. This was largely due to the influx of households relocating from Seoul.

“Due to the lack of jeonse apartments in the market, the growing price situation will likely continue,” said Moon Jong-hoon of the housing statistics center at the Korea Appraisal Board.