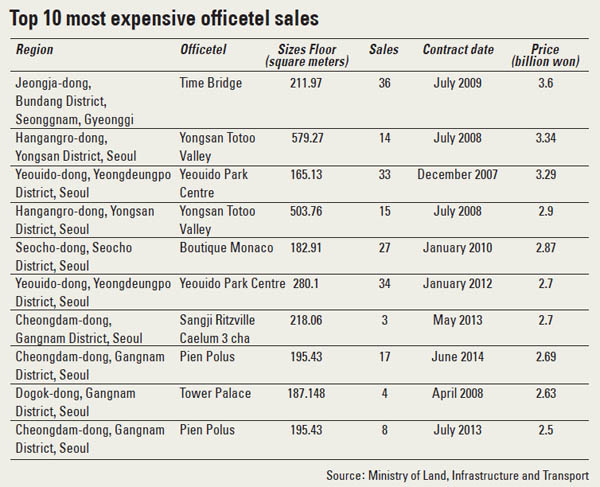 The most expensive officetel apartment ever sold is on the 36th floor of Time Bridge in the fancy Bundang, Gyeonggi, neighborhood. The 212 square-meter (2,282 square-foot) unit sold for 3.6 billion won ($3.04 million) in July 2009.

The Ministry of Land, Infrastructure and Transport earlier this week released a report on the actual prices that officetel apartments sold for since January 2006.

According to the data, officetels in major cities, including Yeouido in Seoul and Bundang in Gyeonggi, are now selling for less than half the price of when they peaked. Even officetels in Time Bridge that reached their peak selling price in 2009 have fallen from 6.29 million won per square meter in 2008 to 3.14 million won this year, a drop of 49 percent.

The second-most expensive officetel is in Totoo Valley, between Yongsan Station and Sin-Yongsan. The 579 square-meter apartment on the 14th floor sold in 2008 for 3.34 billion won. 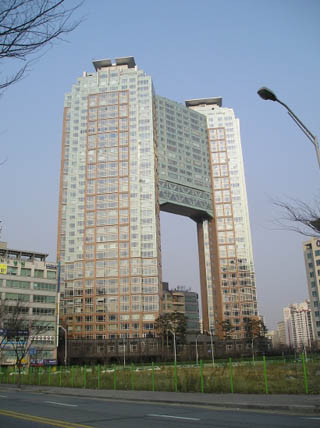 The third-most expensive officetel is in Yeouido Park Centre near Yeouido Station. The 165 square-meter unit on the 33rd floor sold for 3.29 billion won in 2007. Currently, the 128 square-meter apartment on the 28th floor is being sold for 985 million won.

“The officetels are being considered an investment,” said Ham Young-jin, head of research center at Budongsan 114. “But it’s hard to expect as significant an increase as when the market was hot seven and eight years ago.”

Kwon Dae-joong, professor of real estate at Myeongji University, said it’s difficult for officetel prices to go up since management costs are expensive and the spaces are small. He suggested investors pick properties near subway stations.