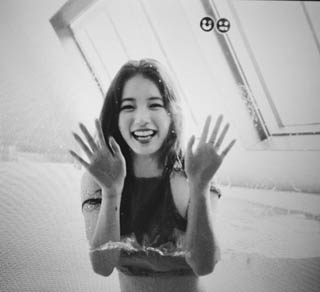 Singer-actress Suzy from the girl group Miss A uploaded a series of pictures of herself on her Instagram account on Friday that signaled a new upcoming project to her fans.

In the photos, the popular singer soaks herself in a water tank. The 21-year-old actress wrote “coming soon,” piquing interest about her next move.

Suzy, one of the most sought-after actresses across the small and big screens, recently finished shooting the period film “Dorihwaga,” which is set in the Joseon Dynasty (1392-1910).

In the film, Suzy plays the role of Jin Chae-sun, a student who learns pansori (traditional narrative singing).

After paparazzi photos by a local newspaper agency of the two dating in London went public in March, the two confirmed they were in a relationship.