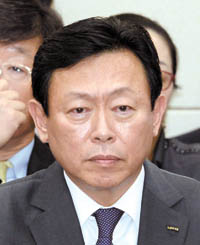 Lotte’s purchase of the New York Palace Hotel was driven by the history and tradition attached with the space, said Shin Dong-bin, the chairman of Lotte Group who also recently took the helm at the group’s hospitality arm Hotel Lotte.

The chairman elaborated for the first time on the reasons why Hotel Lotte was pushing to acquire the New York Palace Hotel in an interview with the Asia Society Korea Center. The Asia Society is dedicated to helping Asian countries forge ties with different parts of the world, and Shin is currently the head of the Korean branch of the body.

“For me, history and tradition are very important. The Palace Hotel possesses a prestigious heritage dating back to 1882, and this was a factor in why I was determined to acquire the hotel for Lotte,” he said.

Hotel Lotte announced in May that it had agreed to buy the New York Palace Hotel in Manhattan for some $805 million.

The Manhattan hotel has 909 rooms and 23 event halls. Aside from its size, the establishment is considered a major landmark, since the hotel was originally an upscale mansion known as the Villard Houses, built in 1884 and owned by Henry Villard, then-president of the Northern Pacific Railway.

Shin touted the building as a combination of tradition and modernity, a similarity he said it shares with Lotte Hotel Seoul.

“The building has undergone a lot of transformation and renovation since its erection, but has always maintained its tradition in blending into the New York landscape.

“In this aspect, I see similarities to Lotte Hotel Seoul: a modern contemporary hotel situated in the historical downtown of the city.”

The chairman also shared how Lotte will operate the New York hotel, expressing hope to further turn the hotel into a great place where prominent figures can host events.

“The New York Palace Hotel has played host to a long list of foreign leaders and dignitaries throughout the years and has forged a reputation as being one of the top luxury hotels in the city,”

“Lotte Hotel Group has a very similar reputation and we believe that we can use our experience in the hospitality industry to strengthen and develop the New York hotel.”

Hotel Lotte announced last month that the hotel chain will acquire 33 more hotels outside of Korea by 2020.

Song Yong-dok, the CEO of the chain, mentioned Los Angeles, Chicago, London, Paris and Frankfurt as potential bases for new hotels in the coming years.

The move is considered a major expansion initiative given that the operator’s global operations previously revolved around non-western countries such as China, Vietnam and Russsia,