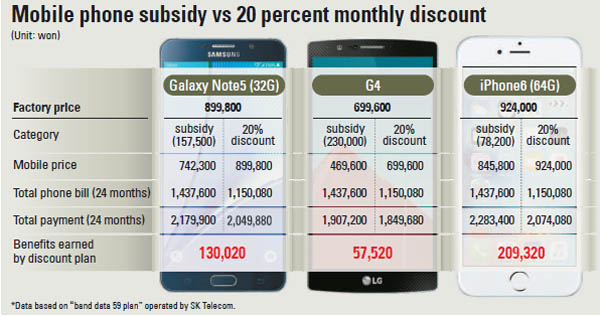 More mobile phone users are taking advantage of a little-known “20 percent monthly discount” plan, which can cut bills in half.

The discount plan offered by all telecommunication companies, gives a 20 percent discount on customers’ phone bills every month after they have completed their initial contract period, as long as they keep their existing phone and do not upgrade.

Chae Min-do, a 45-year-old office worker, recently cut his mobile phone bill in half. “After 24 months of my contract period, I subscribed to the ‘20 percent monthly discount’ plan with my existing phone rather than buying a new phone and my telecommunications budget dropped by half, from 100,000 won ($84.71) to 50,000 won monthly,” he said.

According to the Ministry of Science, ICT and Future Planning, subscribers of the discount plan are increasing rapidly. While there were 150,000 subscribers in March, the number soared to about 2.06 million people as of September 20. 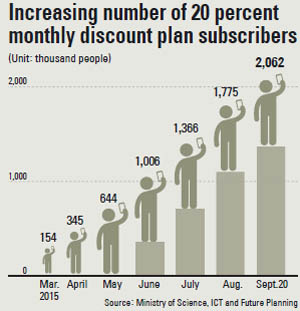 As an example, the “band data 59 plan” from SK Telecom offers unlimited calls and internet data at a monthly fee of 59,900 won before tax. If a user buys a Samsung Galaxy Note 5 with 32 gigabytes of storage, the company gives the user a total of 137,000 won in subsidies. Additional subsidies from sales agencies are offered at a maximum rate of 15 percent, or about 20,500 won.

The discount plan was announced by the ministry in April in a bid to reduce household telecommunications fees. Still, many customers don’t know of the plan due to feeble promotion efforts by telecom companies.

The Korea Communications Commission recently imposed a fine of 2.1 billion won on LG U+ for not informing customers of the discount benefits and deliberately refusing or avoiding customers’ subscription requests.

Following the fine, every customer will now be advised of the plan. Customers will be asked to confirm on the subscription form that they have compared the benefits of the subsidy and the discount, and detailed information on the payment comparisons will be available online.

While the discount plan can mean big savings for some users, it may not be the best choice for all users. SK Telecom increased the amount of subsidies for the Galaxy A5 last month from 135,000 won to 268,000 won for those using the “band data 59 plan”. In this case, taking the subsidy works out to be more financially advantageous.