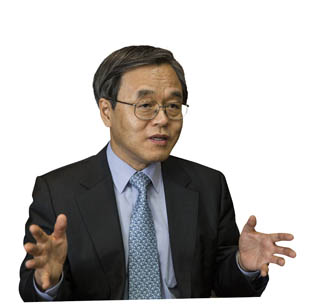 Macrogen is not a household name in Korea, but it is increasingly so abroad. Macrogen is a genomic research provider, offering sequencing and bioinformatics services to academic, pharmaceutical and clinical research communities. Nikkei named Macrogen one of the most promising Korean companies along with portal giant Naver.

When Francis Collins, director of the National Institutes of Health in Bethesda, Maryland, visited Korea in May, the only commercial company he paid a visit to was Macrogen, a testament to the company’s rising profile.

The JoongAng Sunday met with founding CEO Seo Jeong-sun to discuss how the company developed and his view of Korea’s bioindustry.

Q. What led you to found Macrogen?

A. It stemmed from a desire to do research rather than earn money. I set up the company in 1997 when I served as a professor at Seoul National University. At the time, genome research was thin on the ground in Korea, while the United States invested heavily in the field due to the potential of the bioindustry.

Isn’t there is a huge difference between research and running a business?

Macrogen was the first bio startup to be listed on the Kosdaq, though I couldn’t even read a balance sheet at the time. But the stock took off. The shares sold for 500 won ($0.50) at first, then it hit the upper price limit for a month and then increased to 186,000 won. But I feel pressure. After the IPO, the share price rose, but sales remained stagnant. Earning money was harder than I thought. But in 2002, Macrogen made progress in genome analysis research, which served as the basis to steer the company and take it forward.

You saw significant growth in genome analysis. What is the secret behind that?

When asked that question, I always say that luck was with me. But luck is not something that just materializes out of thin air. Luck comes when you follow through on your passion and good intentions while staying vigilant about what is going on. Macrogen’s vision is to help people live longer without disease.

How do you see the future of bio startups in Korea?

Korea is faced with a huge opportunity. The country has well-educated and talented health professionals. Health care in the future will develop along with the advancement of the Internet and communications technology. Failure is a common thing in the startup field, as you know, but failure can translate into a valuable asset called experience.