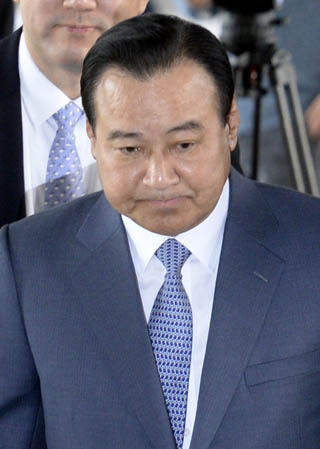 Former Prime Minister Lee Wan-koo, who stepped down over a payoff scandal tied to the late construction tycoon Sung Wan-jong, appeared in court Friday and pleaded innocent to charges of taking bribes.

This is the first time Lee attended legal proceedings since he was summoned by prosecutors in May over allegations of receiving 30 million won ($25,400) from Sung on April 4, 2013. He did not show up for the three preparatory sessions, which were not mandatory. His attorneys represented him at those sessions.

Lee arrived at the Seoul Central District Court shortly before the hearing at 2 p.m. on Friday.

“There is nothing in the world that can defeat the truth,” Lee said before entering the court. “I’ll tell the rest in court.”

At the hearing, he volunteered to read a prepared statement professing his innocence.

“Above all, I’d like to pray for his soul,” he said, referring to Sung. “And I regret this situation as a person who was once in an important position and serving as a lawmaker.

“It was said that I received the money in a ‘Vita 500’ [vitamin drink] box and an interview by [Sung’s] secretary made it even more convincing and even prompted jokes and parodies,” Lee said. “But that detail never showed up on the 2,700 pages of prosecutors’ materials.

“And it’s just common sense that nobody would believe someone knocked on the door of my election campaign office and handed over bribes when there were so many people in attendance.”

The scandal began when Sung, the former chairman of Keangnam Enterprises, hanged himself from a tree branch on Mount Bukhan on April 9 with a list of eight members of President Park Geun-hye’s inner circle in his trouser pocket. Money amounts were written next to some of the names, although not Lee’s. Sung also told an interviewer hours before he died that he had paid money to political bigwigs.

A special investigation team investigated the list for three months but ended up indicting only two of the people - Lee and South Gyeongsang Governor Hong Joon-pyo - for violating political funding laws.

Hong is scheduled to have his third preparatory session on Tuesday.

The investigators believe Lee was given the money when he was running in a local by-election for Buyeo and Cheongyang counties in South Chungcheong in 2013.

The prosecution believes it has enough evidence to prove Lee guilty. The prosecutors on Friday also revealed text messages from Sung’s secretary to Lee’s secretary that read, “The chairman is about to arrive,” on the day of the alleged bribery.

Lee, who has consistently denied the accusations, stepped down as prime minister on April 27, becoming the country’s shortest-serving prime minister, with a term of only 70 days.