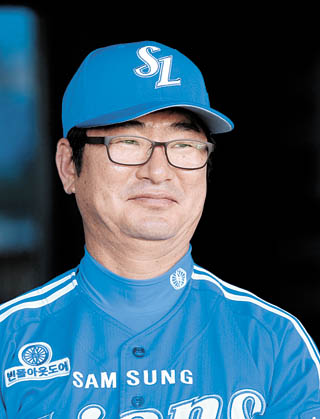 Fans often joke that Samsung Lions manager Ryu Joong-il is a man who doesn’t make progress. But the 52-year-old manager, who took the helm in 2011, probably doesn’t need to pursue progress because he has always been leading the team at the top.

Before this season started, the Lions were again picked as the top favorite to win the title, which Ryu says has always added to the pressure of the job. But he pulled off a victory again as the Lions are now the first team in the Korea Baseball Organization history to win the regular season title for five straight years.

In an interview with Ilgan Sports on Saturday, Ryu, the franchise-star of the Lions who spent all of his professional career with the Daegu-based club, said he credits the players with the team’s success and is ready to prepare for the Korean Series.

Q. How do you feel about winning the regular season for five straight years?

A. We really did it with difficulty this time. We won the title because players have put their best effort forward. We have just completed the first task of our goal. If we lost today [Saturday], the Dinos would have controlled our fate. I was really feeling nervous about it.

The title was confirmed after the Dinos lost to the Wyverns. Did you watch the game?

After the game against the Heroes, we were on our way to the hotel from Mokdong Baseball Stadium. Even after our bus arrived at the hotel, I stayed in the bus to watch the game between the Dinos and the Wyverns. I shouted after the game was completed (laughs).

How do you rate this season compared to the last four seasons?

It’s always difficult. In particular, we had more games this season, and there was no time to rest. In addition, we had a lot of injured players.

But even if there were many injured players, you had good management on your squad and achieved this result. How?

We lost players like Chae Tae-in, Park Han-yi, Lee Seung-yeop and Park Sok-min during the season, but other players managed to fill their void well. For pitchers, Jang Won-sam was struggling, while Alfredo Figaro and Tyler Cloyd had some breaks, but Yun Sung-hwan and Cha Wo-chan did their job well to keep our pitching afloat during the season. I look far ahead in the season. Instead of collecting a victory immediately, what’s important is how you wrap up the season. If you use players in a hurry, there is always going to be a backlash.

If you have to pick MVP for your team, who would it be?

All of our players are MVPs. But if I really have to pick one, I will mention Koo Ja-wook. He first filled the void of Chae Tae-in and then patched up the absence of Park Han-yi and Park Sok-min when they were injured. He really played various roles. That was our good fortune in this season.

Why are the Lions plays better in important games?

Our players have played many big games. Because we have experience, players know how to overcome certain situations and how to play in a certain atmosphere. That’s our asset. Players have the ability to solve the problem on their own.

I think the manager feels most difficulty when starting pitchers are able to collect a win, but we have to replace them. Unless, there is a special situation, we don’t replace starting pitchers, who have qualified to get a win, before the fifth inning. Of course, when they fail, I have to take the blame. If the early replacement of starting pitchers succeeds, our records would have been better. But as I watched from coaching days, starting pitchers often lose their confidence when they go down from the mound, even if they can get a win. So that’s why I try to trust our starting pitchers and let them pitch.

Now, the Lions are going directly to the Korean Series. How do you prepare?

First of all, we have some players who are injured. We will focus on them to recover. Second, since only four wins are needed in the Korean Series, we will try to manage the condition of our starting, relief and closing pitchers. Third, we will try to maintain our forte and resolve our problems by practice. Since the short-term competition is about defense, I will emphasize this to our players.