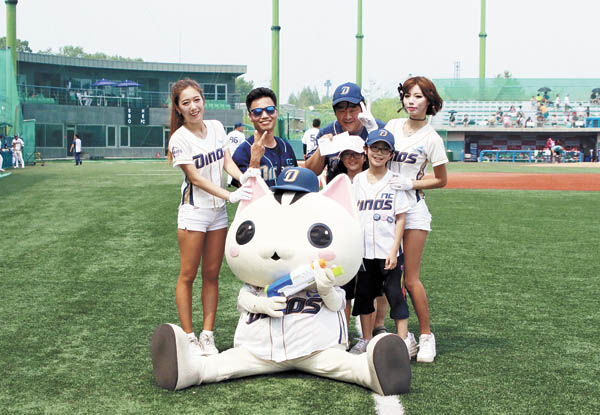 Goyang Dinos, the minor league club of the NC Dinos, have cheerleaders and cat as their mascot. Provided by the Goyang Dinos

Korea’s first independent baseball club, the Goyang Wonders, may have been disbanded last November, but that wasn’t the end of the story for their home stadium.

Goyang Baseball Stadium lives on, thanks to the Goyang Dinos - the minor league club of the NC Dinos in the Korea Baseball Organization (KBO).

The new tenant’s journey to the stadium came as the NC Dinos were having difficulty finding a place for their minors club to play. They couldn’t find a stadium in their hometown of Changwon, South Gyeongsang, and while they eventually used Pohang Baseball Stadium - the secondary stadium for the Samsung Lions - the deal was temporary.

Fortunately, the city of Goyang was also looking for someone to fill the gap left by the Wonders. Last November, the Dinos and the city, which is located about 30 kilometers north of Seoul, signed a deal for the use of the stadium starting this year.

Even though Goyang is nearly 400 kilometers away from their hometown, the NC Dinos decided to settle in the new city and renamed their minor league club the Goyang Dinos.

The decision to stay with the city in Gyeonggi has brought success and is now an example to other clubs.

The Goyang Dinos was grouped with minor league teams Hanwha Eagles and SK Wyverns as well as Hwaseong Heroes, an affiliate of Nexen Heroes.

Their mother club NC Dinos have recently confirmed second place in the KBO League to advance to the post season. Considering the KBO League leader and defending champions Samsung Lions saw their minor club finishing third in the Southern League in the KBO Futures League, the performance of NC Dinos and their minor league club is impressive.

In the KBO, clubs manage their minor league clubs directly. Corporately-owned clubs invest heavily in their minor teams, so they can also have their own training center and baseball field. However, baseball pundits point out that KBO clubs are not interested in making profits through minor league clubs because they consider the small club a farm team. Although teams in the KBO Futures League play more than 100 games in a season, the stadium is usually vacant.

NCSOFT, the online and mobile game development company that runs the Dinos baseball club, said its goal is to have a minor league team management system of its own. Although the system can be similar to the U.S., the company is running the Goyang Dinos with a deep care.

While former LG Twins manager Park Jong-hoon is appointed as the chief of operation for the Goyang Dinos, the team has separate marketing group from its mother club NC Dinos. Even NC Dinos owner Kim Taek-jin has visited the Goyang Baseball Stadium to support the club.

“Up until now, professional baseball clubs have focused on raising future talent in their minor clubs,” said NC Dinos president Lee Tae-il. “We needed a change from the baseball that no one pays attention to to baseball that is watchable.”

Towards this goal, the Goyang Dinos tried something that other Futures League clubs have never done before: charging an admission fee of 3,000 won for weekend games. In their 17 games played on weekends or holidays on their home turf, the Goyang Dinos brought in 6,094 fans.

“People widely think that Futures League games are free,” said Shim Bo-yong, who leads the business team in Goyang Dinos. “While receiving admission fee, we decided to provide a better service to fans. Their reaction was positive.”

Goyang citizens are often invited and can take part in the club’s national anthem ceremony and other events. Their ball boys and batboys are players with the youth baseball team. Even cheerleaders, who are rarely present in the Futures League, are at the Goyang Baseball Stadium.

“Various attempts from Goyang Dinos show that the Futures League can also live on its own ability even if the clubs are based in middle-size cities,” said Hanyang University professor Choi Joon-seo who teaches sports industry.