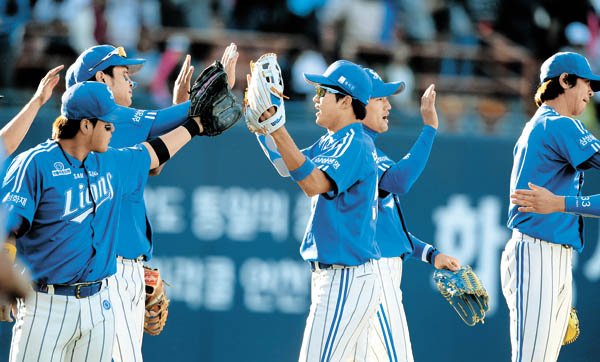 Samsung Lions players celebrate after beating Nexen Heroes 1-0 in their KBO League game on Saturday. But their celebration was half-hearted at this point, until No. 2 NC Dinos lost to SK Wyverns on the same day. The Lions were then confirmed as the 2015 KBO League regular season winner, their fifth straight regular season title. The Lions will advance directly to the Korean Series. [NEWSIS]

Samsung Lions have extended their legacy in the Korea Baseball Organization as they won the regular season title for five straight years.

The Lions confirmed their 2015 KBO League title on Saturday after beating Nexen Heroes 1-0 at Mokdong Baseball Stadium in Seoul, while No.2 NC Dinos lost to SK Wyverns 4-3 in Incheon on the same day.

The result on Saturday gave the Lions two games ahead of the Dinos in the league standings. Since both teams play their final game of the season on Monday, the Lions automatically clinched the top place in 190 days after the new season started.

The Lions have not been a dominating team this season as they had to go through a tight race to the end, but the team performed best when they were up against their closest competitors.

Compared to their last four seasons, the Lions had the best head-to-head record against second to fourth place teams this year.

In 2011, the Lions had a .564 winning percentage against competitors, followed by a .500 winning percentage. In 2013, the team was worse than the year before, marking .479 with 23 wins, 24 losses and one draw against second to fourth place teams. Last year, the Lions were .563 against the other top three clubs.

The Lions haven’t signed free agent (FA) players from other clubs since 2005. Instead, they have focused on raising future talent from their own farm which saw young players perform their best and collaborate with veterans this season. In particular, rookie Koo Ja-wook went .349 batting average with 11 home runs and 57 RBIs in 116 games to rise as the top contender for the KBO Rookie of the Year award.

The Lions will now directly advance to the Korean Series, where they will be looking to set a new KBO record in most consecutive championship titles.

The Lions are currently tied with Haitai Tigers (now KIA Tigers) to win the most consecutive Korean Series titles at four.

Meanwhile, the SK Wyverns have sealed fifth position in the league to join the post season as a wildcard.

The Wyverns finished the regular season at 69 wins, 73 losses and two draws, but their final standing was pending because of No. 6 KIA Tigers who needed to win all three of their remaining games to get the wildcard.

However, the Tigers on Sunday fell to the Bears 9-0 at Jamsil Baseball Stadium in Seoul and missed their chance to play in the post season. For the Bears, the victory secured third place and forced the Heroes to play against the Wyverns in the wildcard series.?