[NEW ARRIVALS] After You

[NEW ARRIVALS] After You 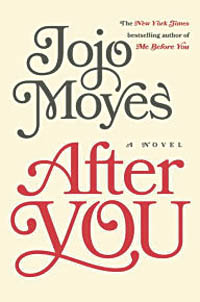 When one story ends, another begins.

How do you move on after losing the person you loved? How do you build a life worth living?

Louisa Clark is no longer just an ordinary girl living an ordinary life. After the transformative six months spent with Will Traynor, she is struggling without him. When an extraordinary accident forces Lou to return home to her family, she can’t help but feel she’s right back where she started.

Her body heals, but Lou herself knows that she needs to be kick-started back to life. Which is how she ends up in a church basement with the members of the Moving On support group, who share insights, laughter, frustrations and terrible cookies. They will also lead her to the strong, capable Sam Fielding - the paramedic, whose business is life and death, and the one man who might be able to understand her. Then, a figure from Will’s past appears and hijacks all her plans, propelling her into a very different future.

“I can tell you that some force within me rejected death at the last moment and then guided me, blind and stumbling - quite literally a dead man walking - into camp and the shaky start of my return to life.”

In 1996, Beck Weathers and a climbing team pushed toward the summit of Mount Everest. Then, a storm exploded on the mountain, ripping the team to shreds, forcing brave men to scratch and crawl for their lives. Rescuers who reached Weathers saw that he was dying and left him. Twelve hours later, the inexplicable occurred. Weathers appeared, blinded, gloveless and caked with ice - walking down the mountain.

In this powerful memoir, now featuring a new preface, Weathers describes not only his escape from hypothermia and the murderous storm that killed eight climbers, but the journey of his life.

This is the story of a man’s route to a dangerous sport and a fateful expedition, as well as the road of recovery he has traveled since; of survival in the face of certain death, the reclaiming of a family and a life; and of the most extraordinary adventure of all: finding the courage to say yes when life offers us a second chance.