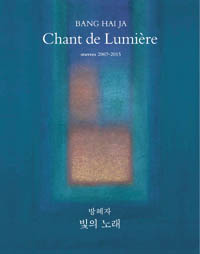 In artist Bang Hai Ja’s work, one can see her reflections on nature, among other themes. For that reason, her works are universal yet profound. Bang was born in Seoul in 1937 and has lived and worked in France since 1961. Ironically, the artist discovered her roots outside her homeland and has maintained references to Korean traditions and techniques in her works ever since.

“Bang Hai Ja ? Chant de Lumiere,” written in Korean, French and English, introduces her works from 2007. Youlhwadang Publishers says the book contains text by critics that have not really been introduced to Koreans. For instance, poet Charles Juliet documents Bang’s life through her works. The two have collaborated in the past. Physicist David Elbaz says Bang’s works open doors for profound questions about the origin of the universe, whereas art historian Yun Nanjie focuses on how Bang uses her key theme, light, in her works.