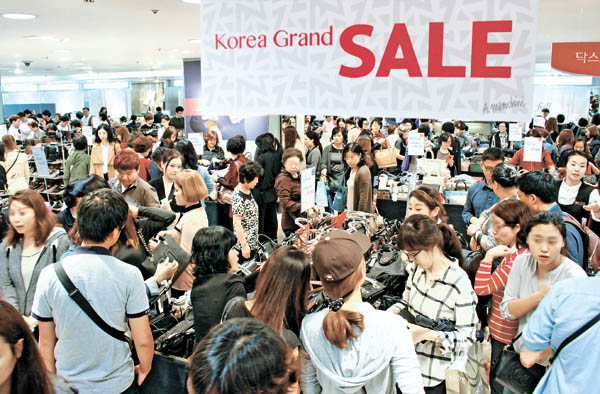 Shoppers look for bargains at Lotte Department Store’s central Seoul branch on the first day of the so-called “Korea Black Friday” on Thursday. Other department stores also reported higher traffic.[Provided by the company]

Domestic consumption appears to be showing clear signs of recovery with sales at major retail outlets making a solid recovery, helped by government campaigns to lift spending, data by the Ministry of Strategy and Finance showed on Sunday.

During the Chuseok holiday shopping period, defined as the three weeks leading up to the holiday, sales at convenience stores and online shopping malls saw a robust 52.3 percent and 14.2 percent growth in sales, compared with last year’s holiday period. While Koreans were shopping more, it seems they still shopped economically.

In September, sales of domestic cars jumped by 15.5 percent year-on-year, while those of large electronic appliances, such as large-screen televisions spiked by 20 percent.

Another positive signal is gradual recovery of the number of foreign tourists, which had plummeted following the outbreak of Middle East respiratory syndrome (MERS) in early summer.

The number of foreign tourists had fallen 53.1 percent in July year-on-year, but the rate of decline has slowed to minus 3.8 percent in September.

Sales at duty free shops also appear to be recovering, with a 5 percent year drop in year on year sales last month, compared with 28.7 percent in July.

“We will continue putting our best efforts forward to sustain consumption’s current recovery track,” the finance ministry said in a statement.

“In addition to the Korea Black Friday event, we will spearhead other events aimed at boosting tourism and leisure industries.”

Meanwhile despite earlier worries about its success, Korea Black Friday, a local version of the U.S.’ Black Friday, is seeing solid initial successes.

The massive sales event kicked off last Thursday and is scheduled to run through October 14.

Lotte Department Store said its sales for three days from Oct 1 to 3 jumped nearly 24 percent year-on-year. This is the biggest percentage sales growth seen since the year end sale in December of 2011.

In terms of items, sales of handbags and shoes spiked by 42.1 percent and 62.8 percent year-on-year, while those of outdoor gear and kitchenware and appliances went up by 20.3 percent.

“We are still in early stage of the Black Friday event, but it definitely appears to be stimulating spending,” said Lee Wan-shin, a marketing executive at Lotte Department Store.

“Black Friday and Korea Grand Sale promotions have encouraged spending by consumers who were interested in the event in the first place,” said Hong Jeong-pyo, a sales executive at Shinsegae.

Hyundai Department Store said its sales during the period October 1 to 3 rose 27.6 percent year-on-year, led by outerwear and knit products.

“As our shoppers are starting to feel the chill, fall and winter items were sold robustly, helped further by the promotional event,” a Hyundai Department Store official said.