EDM culture booms as an industry, mixing with business

EDM culture booms as an industry, mixing with business 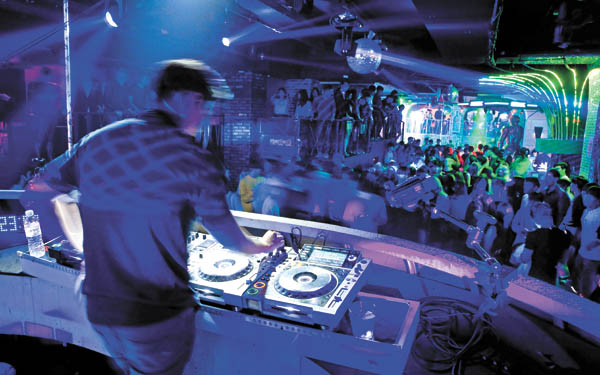 Some may be surprised to learn that Octagon, a club in Gangnam District, was where YG Entertainment and Cheil Industries held an event launching their new casual wear brand. But in fact, this decision goes to show that clubs are not just for a night of fun and dance: They have become a place for business as well.

A favorite among free-spirited and trend-seeking youths, clubs are a huge appeal because they play electronic dance music (EDM), which is soaring in popularity. The Ultra Music Festival, which took place at Seoul Sports Complex in Jamsil-dong in June, successfully garnered about 110,000 visitors.

To fully understand how EDM clubs established themselves as a haven for young adults, the JoongAng Ilbo visited Syndrome, a popular club in Sinsa-dong.

As the hour approached midnight on Sept. 10, eager clubbers waited outside Syndrome, while inside, bodies moved to the beat - a typical scene at the club that operates Thursday, Friday and Saturday nights. Clubs that open at 10 p.m. normally close between 3 and 4 a.m. 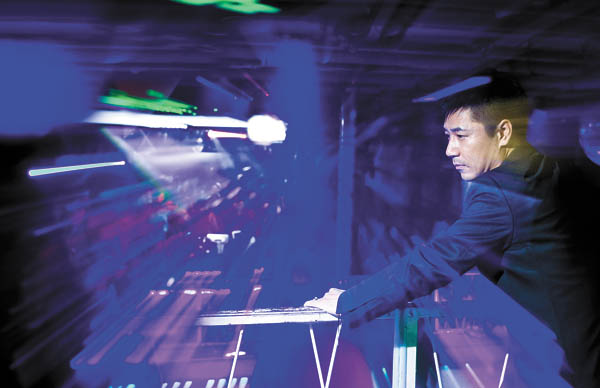 For this special night, Hyejeon of K-pop girl group AOA made an appearance as the DJ. “I’m still a beginner, so please be patient with me,” she said as she introduced herself and the crowd applauded thunderously. Once Hyejeon put on her headphones and nodded her head to the beat, men and women at the front of the DJ booth raised their arms and swayed along.

A melange of deep electronic sounds and fast beats - to consider EDM as merely a type of loud music would not do it any justice. Why else would Park Myeong-su, a host of MBC variety show “Infinite Challenge,” relentlessly persuade preeminent K-pop star IU to assimilate to EDM? With the magic touch of the EDM sound, as soon as the duo began singing their collaborative song, “Leon,” at the show’s special music festival, the venue transformed into an epic outdoor club.

Though clubs serve as an open space for standing and dancing, there isn’t as much room for sitting. Each of the tables scattered near the stage at Syndrome costs hundreds of thousands of won. Most people stick to the dance floor and mingle with others.

“Crowd placement is important. Ensuring that people meet, mingle, separate and meet again in the most natural and satisfying way … we call this ‘connections and tangents,’” Syndrome CEO Lee Kang-hee, 47, said. As he has observed and assessed what people seek from clubs, Lee explained that what might seem like an incidental encounter at a club is, in fact, the result of its inevitability. Clubbers come to enjoy it all - music, dance, the social scene. Bearing these things in mind, Syndrome has developed a system of classifying different zones like “Cabana,” “Pool A” and “Hip-Hop” and of fostering connections among the crowd.

The glamor of the venue scintillates ever more when filled with equally alluring people. This is the result of what is commonly referred to as “quality control.” “Keeping track of models, entertainment trainees and regular customers on a daily basis, we maintain that at least 10 percent of attending visitors are young, attractive men and women,” Lee said.

“We received information that she was coming to the country for hotel-related business, so we were able to contact and bring her in by offering a guarantee just for her,” Lee said, adding that idol group members like Big Bang’s Seungri frequently visit Syndrome. “Though these types of guest don’t demand any special treatment, we nonetheless attend to them with great care.”

While the club previously pooled guests offline through promoters out on the streets, nowadays it’s all about scouting online or via mobile apps. The mobile app “Club Mix,” which distributes free entrance tickets, already has 600,000 registered members. The app also draws members from those that want to make table reservations. 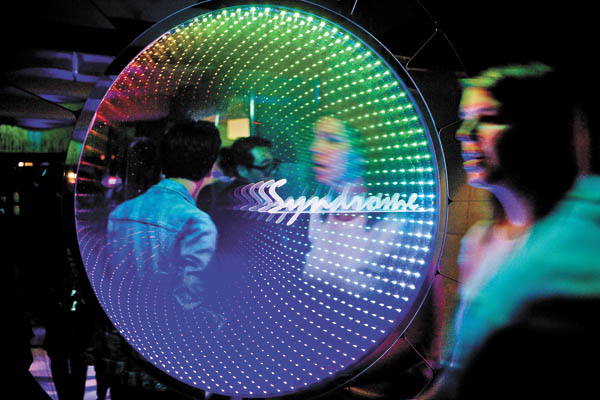 Lighting adds to the festive atmosphere inside Syndrome. By Kwon Hyeok-jae

From Hongdae to Gangnam


Last November, the Riverside Hotel in Jamwon-dong, Seoul, became the talk of the town, as its pool nightclub, which had launched along with the hotel in 1981, closed after operating for 33 years. Currently, an after-club (club that operates until morning) called Van2 operates in its place. This change demonstrates that Gangnam’s night culture has entered a new era, from nightclubs to dance clubs.

Nightclubs like Juliana, World Pops and Studio 80 once dominated the Gangnam night culture. These days, EDM clubs like Octagon and Syndrome are on top.

At nightclubs, booking, or arranged meetings for singles, was as important as drinking and dancing. Though EDM clubs serve a similar function of providing space for social encounters, what now brings the clubbers together is music. On the dance floor, people naturally pair up.

The history of Korean club culture can be traced to the Hongdae area, where the club Power Plant, founded in 1992, is considered the pioneer. Though the club originally established itself as a “rock bar,” it quickly evolved into a techno club and then an EDM club. Hip-hop and EDM compete at clubs like MyongWolGan, Joker Red, MI, Fizzle Out and NB. Once “Club Day,” where participants get an all-night pass to multiple clubs, was launched in 2001, the club mania got even stronger. 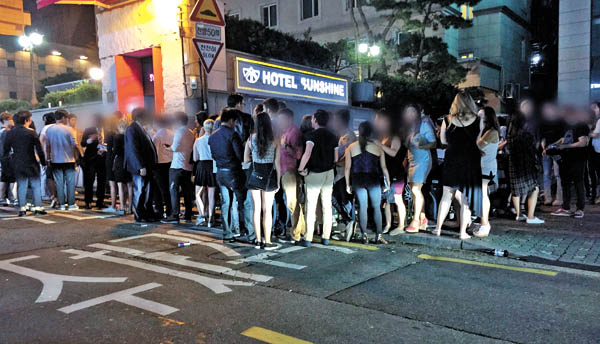 A line of clubbers wait outside to enter Syndrome. By Kwon Hyeok-jae

The EDM trend soon spilled over from Hongdae to Itaewon and Gangnam. Ryu Jae Hyun, CEO of Ideamasters, a cultural event organization, said that the turning point was when Club Day ended in 2012 (later to be reinstated) and Gangnam clubs actually decided to drop their cover charges.

As large clubs gradually changed the type of music they played to EDM, DJ preferences also changed. While DJs previously received attention for their looks and fame, in the world of EDM, musicality is emphasized. There has also been a rising trend of fandoms tracking their favorite DJs and choosing their club venues accordingly.

Lee entered the club management industry in 2006 with “Spot.” A self-made karaoke businessman, Lee initially approached the industry from the business level only. After a series of trials and errors, and accumulating debt, he had thoughts of suicide at times.

“I had entered the industry without any knowledge of the music trend. Once I truly committed myself to running a legitimate club and delved into EDM music, only then did I fully grasp the cultural impact of EDM,” Lee explained.

After researching the types of music, crowds and lighting clubbers preferred, Lee also created a party environment familiar to international students and foreigners. As result, his Gangnam club, Holic, immediately became a hit.

Shortly after, Syndrome opened at the end of 2013. “Currently, Syndrome has the highest attendance level in Gangnam,” Lee said, noting that Syndrome receives about 3,000 visitors daily.

Currently, club culture and the entertainment industry are converging. For instance, Lee has partnered with Dragonfly Entertainment and invested in festival and party planning as well as record labels. He also delved into the fashion and cosmetics businesses, taking clubbers’ lifestyle into account.

“Since outdoor festivals typically end around 10 p.m., those that want to continue enjoying the night often resort to clubs,” said event planner Park Jae-hyung, adding, “Indulging in entertainment and leisure is a priority, and clubs happened to be a subset of such interests.”

These days, the most valued customers of Gangnam clubs are foreigners. Lee noted, “I heard of a Chinese customer who spent 70 million won ($60,000) at a club in one night.” To sustain this surplus of foreign customers, there is a developing club tourism industry.

Last November, Shin Yeon-hee, chief of Gangnam District, noted that “in order to maintain a sound and stable influx of foreign visitors,” the district would start establishing “world-class entertainment clubs.” Syndrome was one of the 10 global party venues designated by the district.

However, to this day, clubs have negative associations due to drug overdose and tax evasion scandals that often involve foreigners and chaebol heirs. There are mixed views on the measures taken by the Mapo District Office to ease tax regulations on Hongdae clubs.

But all agree that clubbing culture in Korea is going through a transition. While clubs used to be part of the underground culture, attracting customers using provocative content such as sexual images, they are now focused on a mainstream audience and quality music.

As the club scene expands, so do the wallets of the world-class DJs


“We live in a post-sampling era. We extract parts from our favorite songs and create new music. This is how we can contribute to the evolution of music,” current DJ and producer Kyum said at a TED conference, a forum for international scholars and creative figures, last May.

Mark Ronson, 40, British DJ and Grammy Award winner, has received critical acclaim for his endeavors in exploring the evolution of music through digital DJing. He is the epitome of the changing role, influence and status of DJs in modern music culture.

In the today’s electronic dance music (EDM) culture, the role of DJs is not limited to handling music: They can mix various songs to produce a whole new music according to their own taste and style. After some progress, they can then be worshipped as cultural icons and festival and party leaders.

Inviting such artists in high demand comes at an astronomical cost. “It costs 500 million won ($420,000) to invite a world-renowned DJ for a two-hour mixing session. We once had to cancel inviting David Guetta, who demanded 1 billion won,” Lee said.

On Forbes magazine’s list of “The World’s Highest-Paid DJs” published last August, British DJ Calvin Harris, who earns $66 million a year, was ranked No. 1. Of this total income, Harris’ endeavors outside of music, such as modeling for the Italian luxury brand Giorgio Armani, yields about $10 million. French DJ David Guetta, 48, who earns $37 million, came in second.

Even within Korea, the influence of DJs is increasing day by day. The online magazine “Party Luv,” which publishes a monthly ranking of the top 10 DJs, placed DJ Koo, of dance duo “Clone,” on top of the list. Even stars like Park Myung-su (also called G-Park), Ryoo Seung-bum and Shin Dong-ho (of K-pop boy band U-KISS) are actively participating in EDM culture. Top-class DJs widen their area of expertise by utilizing a whole array of music genres, ranging from commercial jingles to game soundtracks.

Though DJing has become one of the most envied career paths, there are serious hurdles in the training process. The most exemplary victims are unpaid DJ apprentices. After initially signing up to further their DJ education, they enter the industry only to be given miscellaneous tasks. DJ Serge Orvin, who had been active for over 10 years, admitted, “The salary for a DJ is unstable. Only prominent DJs can profit significantly,” adding that “the stigma attached to DJing as a frivolous job hinders me from pursuing it as a mid- or long-term career.”