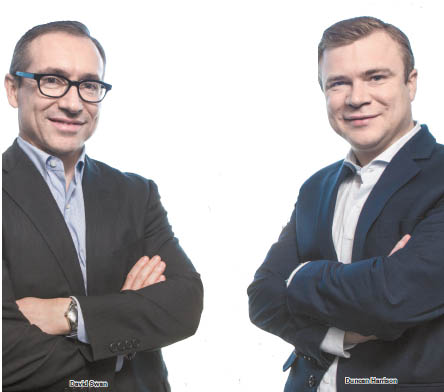 Headhunting experts say young Korean job seekers should look overseas for job opportunities, and to make themselves more attractive to employers, the most important factor is developing strong skill sets.

David Swan, managing director of the UK-based headhunting firm Robert Walters’ offices in Korea and Japan, and Duncan Harrison, country manager of the firm’s Korean office, recently sat down with the Korea JoongAng Daily to talk about the current status and future of the Korean job market.

The headhunting firm, which initially started out specializing in finding candidates for financial positions at foreign investment banks in Korea, now has a broad range of clients and resumes, including IT, online gaming, retail, consumer, heavy industries, chemicals, healthcare and financial services. It connects the sectors with candidates skilled in various areas like accounting, supply chain management, marketing and compliance. The number of clients at its Seoul office has steadily grown to more than 100 in the five years it has been in operation.

The two heads of the headhunting firm emphasized that the global economic trend of low growth won’t hinder job seekers from finding quality positions, saying that hiring is always happening for those with the right skills.

Q.Many economists say we’re facing a new normal of low economic growth. How do you view the job market, which many say has steadily shrunk for the past few years? Would employers overseas hire in a tough economy?

Swan: Oftentimes the public thinks that the performance of the market that we’re in [recruitment and headhunting] is impacted by the economy. Even in the most terrible economy, there are still jobs available for people with certain skill sets.

The financial services sector is a good example. The sector hasn’t hired much in the past few years, but even in such circumstances, the sector showed active hiring with certain positions like compliance.

Also, for example, Japan is our best-performing office in the world. Our office has grown almost ten times over 15 years, even though Japan was in recession. It’s an indication that the job market is detached from broader economic issues in many ways.

When it comes to hiring and getting a talent, it’s not all about growth. We just don’t make placements just because of growth, but rather due to turnovers. All we need is churn. What drives churn is confidence. When people are confident about the economy and prospects, they will be prepared to change jobs. Major numbers of the positions that we fill would be replacement positions, not necessarily newly created ones.

The Japanese job market is similar to Korea in many ways. Japan’s population peaked two to three years ago, and has been declining since then. We’re progressively seeing a steady shrinking of the overall workforce. Very similar to Korea, there are about 2,000 foreign companies in Japan and about 30 entering the country every year. Because the improved economy and growing of businesses, these foreign and local companies want bilingual resources.

Then, it’s got to the point now where there’s an excess of jobs over job seekers. The latest figure I’ve seen showed that there were 1.19 open jobs per job seeker, but there is a skills mismatch in which [there are actually only 0.6 open jobs per job seeker for 50 percent of those looking for work]. Looking at more specialized job areas like engineering, software development and online marketing, especially in the cities, you begin to see three to five open jobs for every job seeker.

There are extreme shortages happening. I think Korea will see the same trend in Japan in a few years because the Korean population should peak sometime in next 10 years and drop off at an even sharper pace than Japan. So Korea will encounter the same problem.

President Park Geun-hye mentioned that Korean college graduates have to consider getting a job abroad, but jobs offered overseas or at foreign companies are known to mostly hire workers with working experience of at least five years.

Swan: It actually has a lot to do with personal skills and particular circumstances. So instead of, “All these people can go abroad,” it’s more like, “This particular person could go abroad.” It very much depends on what they [the job seekers] have to offer, and they have to think if they will be able to compete in that market.

Harrison: But I can see why she [President Park] made such remarks. She wants to make the workforce here more competitive and thinks that making people go overseas, getting experience there and coming back to Korea [will help develop the overall job market here and its culture]. The thoughts behind what she said make sense. It’s just the implementation of such a system is difficult, especially when it comes to sending the job candidate out of the country, rather than just making them send out a resume.

The market for bilingual professional talent continues to grow in most markets around the world. In the case of Korea, there are more than 100 companies coming in [every year], and foreign companies are growing their presence. Korean companies also increasingly need bilingual talent, so the demand for these people keeps rising. But the supply isn’t keeping pace.

There is a shortage of bilingual skilled talent in areas like engineering, software development, human resources, some finance sectors and healthcare. These sectors don’t find enough skilled talents to meet the demand.

I would say one would be better off going abroad first, especially in their junior years. There is demand for junior-level talent if they have right background. If they have enough skills, experience of less than five years certainly is not a problem, maybe even if the person is a new graduate.

I would say [employers seek] not only English skills, but the global skills. I know it’s a bit vague, but it’s an ability to speak English or another language like Mandarin and to operate in the global environment where people will speak up and join the collaborative effort of bringing different ideas.

Nowadays, the difference of competitive and non-competitive organizations mostly comes down to the quality of their ideas. So it’s really important for an organization to set itself up in a way where the best ideas can be generated. So what we see is that global organizations want people with ideas and who can bring in others’ ideas, instead of someone who can get lots of work done. These companies pursue such belief through diversity, bringing more women into senior, decision-making positions and nationalities. This happens in all sectors.

Harrison: Generally speaking, according to what we hear from clients, high education is one of the first comments the higher managers would make about Korean talent. Korea is strong in education, and the people are well-skilled in certain areas. Younger generations tend to show quality English skills, certainly compared to their Japanese counterparts. Koreans are also driven.

Koreans, however, tend to lack creativity. Workplaces in Korea tend to be rigid and structured, while not really fostering creativity and creative thinking among younger staff.

Working at an international organization requires [the staff] to raise their own opinion better and have more creativity. Generally, not speaking out an opinion considering the age-oriented hierarchical corporate culture is something that foreign companies struggle with, like junior-level staff getting rigid and nervous of speaking up their opinion which is very different from the Western work environment.

Another thing is that in the Western culture, junior-level workers speak up and make decisions along with everybody in the business involved. If I’m hiring, I would hire somebody who can give ideas and suggest things that could be improved to the business, rather than somebody who does exactly as management says.

Swan: Because of the heavy regulation in unionization, I think it makes it a bigger decision to hire permanent employees, and I think it makes it quite risky that it’s difficult to dismiss underperforming employees. I think it’s not only foreign companies [that are the only ones] struggling with this problem. It’s the same with Korean companies.

One of the problems that management is trying to deal with obviously is the large number of people working on long-term temporary assignments. The way I see it is that the problem is not with the temporary arrangements.

It seems like there is a difference in how Korean people view flexibility. Many people feel there are not enough social safety nets, and employment conditions are bad if they’re hired temporarily.

But if you suddenly do that, you’ve got a problem, because there always has been people who have got to be let go. You now have no support, no social infrastructure.

So there probably needs to be some sort of way for the government working together with the private sector to create some sort of fund to support these people to reskill, retrain, find alternative employment and get them back into the workforce in a productive way.