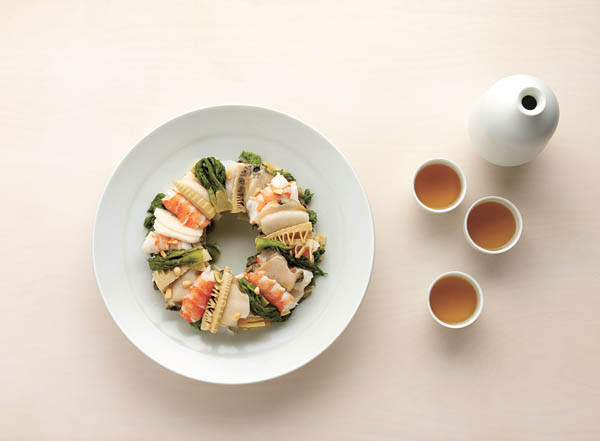 For dugyeonju, experts made a dish made of fatsia and bamboo shoots.

Like dining, drinking is a culture in its own right.

In fact, alcoholic beverages are a crucial part of dining culture, and their traditions are passed down through the generations worldwide.

Korea’s drinking culture today is better known for pairing beer with chicken (called chimaek in Korean) and soju with pork belly. It’s customary that you finish your first glass in one shot. It’s also expected for younger people to receive a glass from their seniors with two hands. And the list goes on.

But what about hundreds of years ago? 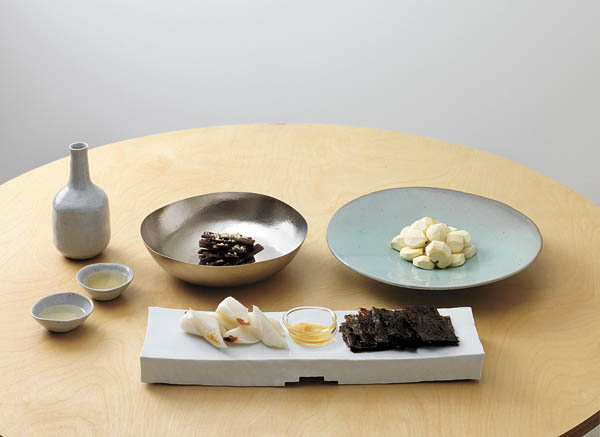 Arumjigi is a nonprofit organization that has been introducing traditional Korean culture in areas of clothing, food and housing since 2004. Traditional artisans and contemporary artists collaborate for about a year on a subject and the results are shown at an exhibition.

This time, Arumjigi has chosen Korea’s traditional drinking culture as the subject of its 12th exhibition.

At the exhibition, titled “Traditional Alcoholic Beverages With Side Dishes,” people will be able to learn about the traditional alcoholic beverages of Korea, the side dishes that go with each of them, and the stories and customs related to these alcoholic beverages and side dishes. Visitors will also get to see craft and design pieces that complement the drinking experience. 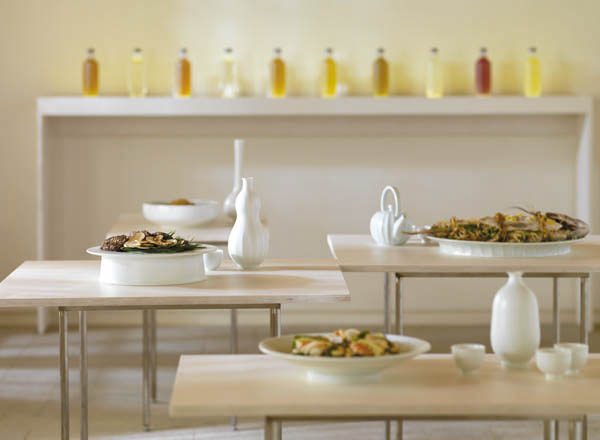 The exhibit showcases foods that go well with each traditional liquor.

“Alcoholic beverages are more than just drinks,” Kim Hye-jin of Arumjigi’s culture planning team said. “There are life’s joys and sorrows in them. Sometimes they are used to cure illnesses. Other times, they are intended for people to have fun.” Because of their important role in people’s daily lives, there were also strict rules for how to enjoy them, she added.

Ancient Koreans picked fruits and flowers from the mountains and fields, and with them made alcoholic beverages according to the recipes of their households or regions passed down generation after generation.

At “Traditional Alcoholic Beverages With Side Dishes,” visitors will be able to learn about the old-time alcoholic beverages of Korea. Top: Duryuntakju is a liquor indigenous to Haenam, South Jeolla, and is known to cause no hangover. Center : Sogokju is made from chamomile, which blooms between September and October. Above: Dosoju, which is flavored with various herbs, is enjoyed at the New Year. Photo by Lee Jong-keun

But there were common denominators: Many of them were fermented and used grains as main the ingredients. People also made them with the philosophy that alcoholic beverages can be medicine.

Gayangju - or homemade traditional alcoholic beverages - are believed to number in the tens of thousands. Although many of them disappeared after Japanese colonization (1910-45), some remained to be passed down through the generations and are even recognized today as Intangible Cultural Heritage items.

The Arumjigi exhibition consists of four parts, and the first part is dedicated to alcoholic beverages.

Organizers say the types of alcoholic beverages people drank and the way they drank them differed depending on the occasion and participants.

Craft and design experts also participated in the exhibition, to suggest the most appropriate - and beautiful - bottles, cups and plates.

For instance, at the New Year Koreans drank dosoju, which is made by steeping a hemp bag of herbs in alcohol. Families gathered in the eastern part of the house to drink it, and it was apparently mild enough even for children to partake. The exhibit also introduces haphwanju, which the bride and groom drank on their wedding day. It is made with more than 100 types of flowers and thus is known for its scent.

Koreans also made alcoholic beverages according to what was available by season. In the spring, they drank dugyeonju made of azalea. During summer, they drank gwahaju which is made with high-concentration distilled liquor or soju, as things easily go bad in the hot months. In the fall, sogokju, which is made of chamomile that blooms between September and October, was popular. And finally during winter, Koreans drank heobeokju, which also contains soju to keep bodies warm.


“Most Koreans today, when they think of alcoholic beverages for celebrations and banquets, think of wine or champagne,” Kim from Arumjigi said. “We planned the exhibition so that people can find the roots of Korean liquor,” she said.

But what really makes the Arumjigi exhibition fun is that it tries to present the whole picture: Besides introducing 10 types of traditional alcoholic beverages, the show has also recreated, with the help of traditional Korean experts, the accompanying anju, or side dishes that are enjoyed with drinks.

For instance, for gyodongbeopju, a drink that ancient Koreans enjoyed to celebrate comings of age, the foundation suggests tteok (rice cake) wrapped in dried laver, chestnuts and beef jerky. For dugyeonju, the exhibit presents a dish made of fatsia shoots and bamboo shoots, which grow in spring, while for heobeokju, they recreated a steamed dish of sea bream with beef and bean sprout filling.

In addition to that, the food and drink experts collaborated with about 30 craftsmen and contemporary designers to create the most appropriate - and beautiful - bottles, cups and plates.

Kim said that since people tend to think of traditional practices as old or difficult, they deliberated on ways to make the show more enjoyable. “That’s how we thought of introducing pretty and sophisticated contemporary chinaware that people would feel the urge to purchase and keep in their dining rooms.”

Whereas most people think of just a good old wooden tray and earthenware cups when it comes to setting a table for traditional drinks and food, for this exhibition the team of craftsmen used silver, steel, leather, marble and other materials to create various pieces.

Pieces like a kettle by Kang Woong-ki and a tray and cups by Hyun Ji-yeon are not just modern and contemporary, but also pieces of art in their own right. The bottles by Sung Jung-gi, meanwhile, all have different surfaces and clarities to represent different types of liquor.