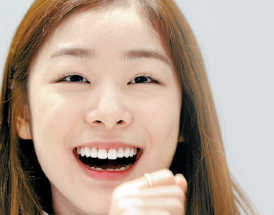 Figure skater Kim Yu-na is still a star and national hero even though she retired from the ice rink after the 2014 Sochi Winter Games in Russia.

Celebrating its 50th anniversary, the JoongAng Ilbo and Kyung Hee University conducted a survey that asked 3,068 people to vote for the most attractable figure who represents Korea. Kim was the dominant No. 1 choice after getting 38.1 percent, or 1,169 votes.

“I can’t believe I was selected as the most attractable person to represent Korea,” Kim said in an interview with JoongAng Ilbo last month. “I think many people still like me because of my attitude of giving the best effort in my field to pursue a goal without giving it up. I’m just thankful to all the people who remember and support me.”

Kim, whose nickname was the “Queen” on ice, was not only dominant in her sport, but her beautiful performances also caught the attention of fans worldwide. She was the first Korean to win gold in figure skating at the 2010 Olympics in Vancouver and is the world record holder.

“Figure skating has not been drawing attention in Korea,” she said. “Although it’s not a popular sport here, as I competed against skaters from big skating countries and won against them, I think people looked at me with more affection.”

When asked what she thought added to her attraction, Kim suggested her easy-going, folksy attitude warmed people to her.

When Adelina Sotnikova had her controversial win at the 2014 Sochi Winter Games, Kim, who took the silver medal, kept calm and composed and congratulated the Russian at the podium, which moved fans’ hearts.

Despite hanging up her boots, the 25-year-old is still busy, now working for others.

Although she is pursuing a master’s degree in physical education at Korea University, Kim has frequently visited the ice rink at Taeneung Training Center in Seoul to advise young figure skaters.

She is also busy as the honorary ambassador to the 2018 Pyeongchang Winter Games and Paralympic Winter Games.

Despite these roles, Kim admitted she had gotten a little lazy after her retirement. “When I was a skater, I was busy training five or six days a week,” she said. “After retirement, it’s good that I don’t have to worry about getting an injury and training, but it’s true that I got a little lazy.”

Despite her tight schedule, Kim said she has a small dream to pursue.

“I have yet to have a trip which can really be called a ‘trip,’” she said. “If I have some time, I want to go on a real trip to many places.”

For 17 years, Kim performed on the ice and always ended competitions on the podium.

However, the two-time world champion admitted there were many difficulties and sadness throughout her career which made her think of quitting the sport early. The retirement finally happened after the Sochi Winter Games.

“I was able to be a mature person through those challenging moments,” she said. “Figure skating is my fate after all.”

For Kim, the attractiveness of Koreans can be summed up in their endurance and passion.

“I think people picked me as the most attractable Korean because I showed the passion of a non-quitter and endurance of standing up again despite falling on the ice,” she said.

When asked what she thought was the most attractable field in Korea, Kim replied, not surprisingly, with sports. However, she lamented the lack of attention on unpopular sports.

“Lots of athletes in the unpopular sports are still sweating, and there are many people who are doing their job silently in our society, but no one recognizes it,” she said. “I hope people and the media pay more attention so that those who are working silently can cheer up.”

Although she is working on various other projects, Kim said she hopes to be remembered as the Queen on ice.

“I’m basically a figure skater,” she said. “Even after a long time, I hope I can be remembered by people as a person who always tried her best.”