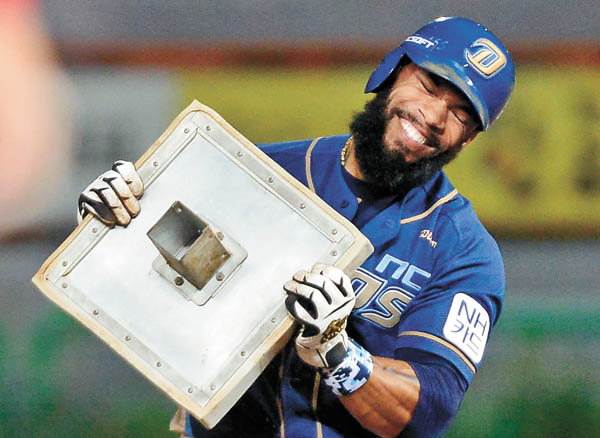 The NC Dinos’ Eric Thames holds second base after getting his 40th steal in the third inning of the KBO League game against the SK Wyverns in Incheon on Friday.[NEWSIS]

Last Friday was a big record-setting day for the KBO League. While the Nexen Heroes’ Park Byung-ho set a new single-season RBI record at 146, which is two better than the previous record held by Lee Seung-yuop of the Samsung Lions in 2003, the NC Dinos’ Eric Thames achieved something that is even more rare in Major League Baseball.

Thames on Friday became the first player to mark “40-40” by getting 40 home runs and 40 steals in a single season.

The 28-year-old American, who is in his second season with the Dinos, collected his 40th steal of the season on Friday in the third inning against the SK Wyverns in Incheon. Before the steal, the slugger hit his 47th home run of the season in the first inning.

Thames, who plays first baseman or designated hitter, achieved 30-30 on Aug. 28, which was recorded seven times by five different players previously. But 40-40 has never been reached in the KBO or Japan’s Nippon Professional Baseball.

In Major League Baseball, there have been only four 40-40 seasons, with the most recent one accomplished in 2006 when Alfonso Soriano was with the Washington Nationals.

For Thames, a former Toronto Blue Jays and Seattle Mariners player, this isn’t the only record he achieved this season. He also hit for the cycle twice - April and August - and became the first player to do so in the KBO’s 33-year history.

There were rumors that Thames, who is a strong MVP candidate this season, might head back to Japan or the United States after this season. But on the same day, the Dinos announced that they reached an agreement with the slugger to stay one more season.