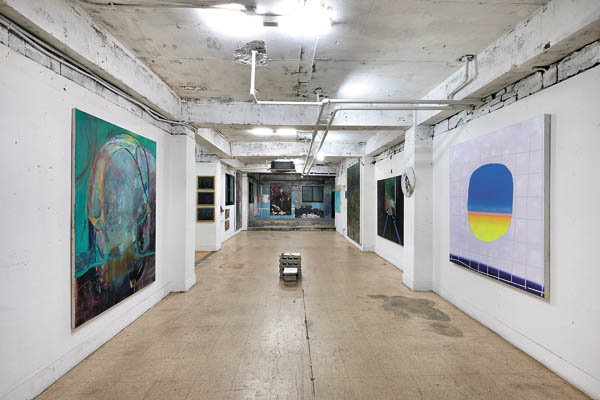 The Common Center in Yeongdeungpo District, western Seoul, will display about 150 contemporary art pieces for visitors to enjoy and to buy. According to the organizer, the works are perfect for single households. Provided by the organizer

On Friday afternoon, Sohn Young-jin, a 62-year-old woman from Seoul, gazed at a landscape painting, in which an old bus travels down an unpaved road in the Korean countryside, at an art fair that was held at Gwanghwamun Citizen’s Open Madang in central Seoul. She took several pictures of it and text messaged her daughter to ask her if the painting would look good on the wall of her living room.

Sohn took another slow tour around the Western Painting section of the art fair, but then came back to the landscape painting and murmured to herself, “This one keeps on coming into my sight.”

The painting she liked is by artist Ko Jae-goon, whose signature style is landscape paintings that include old buses, images that evoke nostalgia for people of Sohn’s age. She walked to the reception area to ask for the price. The painting cost 1 million won, the highest possible price for a piece at this “affordable” K-Art Street Fair. 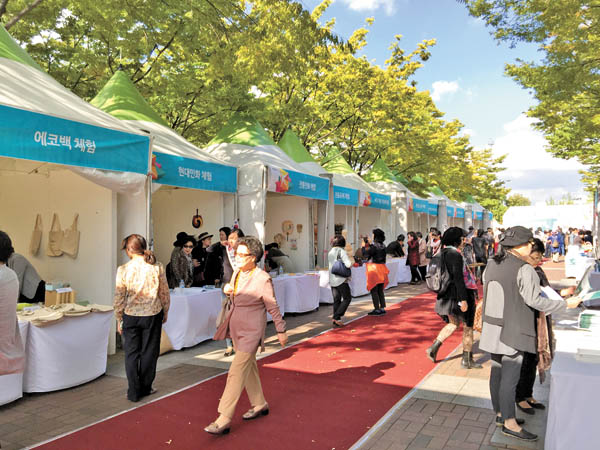 The experience zone at the K-Art Street Fair, which runs through today at Gwanghwamun Citizen’s Open Madang. Provided by each organizer

Purchasing an art piece at an art fair is still considered a luxury, or an activity for the rich, among ordinary Koreans, despite their increased in cultural consumption and emphasis on quality of life. Expensive paintings by renowned artists are bought for tens of millions of won at large art fairs, such as the upcoming Korea International Art Fair that kicks off Wednesday at COEX in southern Seoul.

But many art works and paintings by up and coming artists, according to the Korea Arts Management Service, are not so expensive and are in fact affordable. In an effort to dispel the belief that purchasing art is out of reach, the service decided organize and support a series of Visual Artists Markets that will be held not only in Seoul but also in Busan and Daegu through the end of this year.

“This kind of art fair, or an art market, will offer artists the opportunity to find new markets to sell their works while providing the public a chance to purchase artwork at an affordable price,” said Kim Sun-young, president of the Korea Arts Management Service. 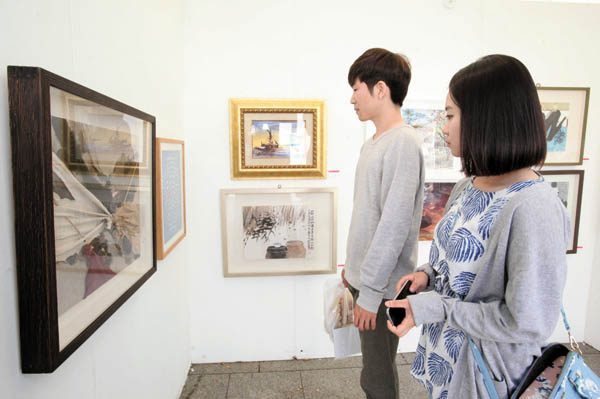 Visitors view the paintings for sale at the K-Art Street Fair. Provided by each organizer

“I hope this kind of art market also contributes to more Koreans enjoying the culture of art and the spread of the trend of possessing at home a painting or two by an artist.”

Ten groups including four teams of rising artists were selected to showcase their works at various public and private spaces across the country beginning in September. The Korea Arts Management Service, which is an affiliate of the Ministry of Culture, Sports and Tourism, provides the operating expenses while returning the entire profit from the sale of art to the artists to help them build their careers.

For the K-Art Street Fair in Gwanghwamun, which ends today, 2,000 artists are showing off about 2,400 artworks to the public. The only requirement is that the price for a piece cannot be higher than 1 million won.

“I’ve never been to an art fair or even thought of purchasing art because I thought they were exorbitantly pricey, but I’ve enjoyed shopping for a painting today as I can actually afford one if I want to,” said Kim Ye-in, a 30-year-old office worker in central Seoul. “It is indeed an art market that caters to the ordinary citizens.”

Starting Wednesday, a deserted house in Yeongdeungpo District, called the Common Center, will also turn into an art market for young artists. They will be displaying about 150 contemporary art pieces that are especially suited for the small spaces of single-person households in Korea.

“Just coming to the venue, which is very unique and special, and enjoying the installations and paintings will be a whole new experience,” said Lee Won-seop, coordinator of the Common Center.

From Oct. 14, 80 young artists will show off their work at the Sejong Center for the Performing Arts in central Seoul for five days. All of the artists at this market, called “Goods,” are aged between 26 and 36.

“Since the artists are very young, they have fresh new ideas and they will be taking the lead in planning the art fair and coming up with an unconventional way of interacting with the public,” said an organizer from Goods. 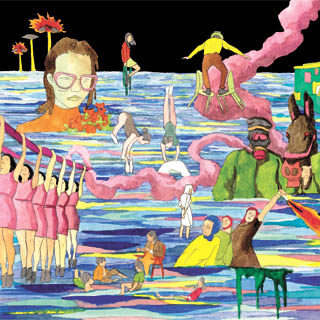 Artist Noh Sang-ho designed the cover of indie rock band Hyukoh’s album. His works will be on sale at the “Goods” fair starting from Wednesday at the Sejong Center for the Performing Arts, together with the works of 80 other young artists. Provided by each organizer

One of the well-known artists participating in this fair is Noh Sang-ho, who recently became recognized for designing the cover art for an album by the popular indie rock band Hyukoh. Noh is said to be painting at least one album cover-sized piece a day, and his works can be purchased at the fair for less than 20,000 won.

Artist Eom Yu-jeong, who is known to for selling out all the works she uploads to her Instagram account, will also participate in the Goods fair. She’s known for depicting scenes and people she happens to encounter, and expanding them into paintings and animations. For Goods, she has turned the Walking Man figure from her animation drawing book “Tunnel 2014” into ceramics, which will be on sale at the market for around 100,000 won.