Now anyone can walk the red carpet

Now anyone can walk the red carpet 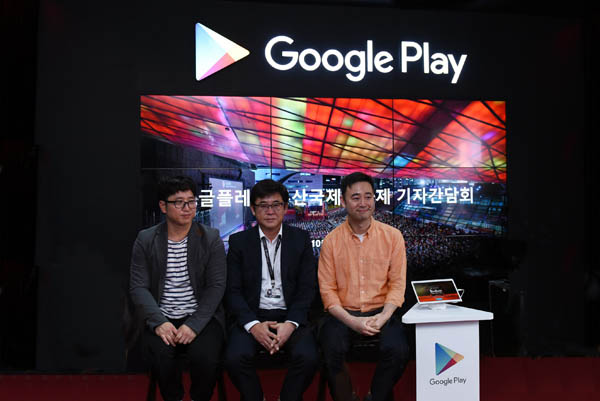 From left, Yoon Seong-ho, a filmmaker, Yang Heon-kyu, the general director of the festival, and Paul Kim, the head of marketing, devices, content and retail for Asia-Pacific at Google take questions from the media at a press conference on Saturday in Busan about the newly launched service called “Google Play Inside BIFF,” which is available until Oct. 31.

Participating as a premium sponsor of the 20th edition of BIFF, Google Play, an online market of diverse digital content for Android users, launched a website - inside.biff.kr - that enables online users to vividly experience the opening ceremony of the event.

Under the title “Google Play Inside BIFF,” the page resembles the street view service from Google Maps, but the streets lined with shops are replaced with the glamor and glitz of the opening ceremony that took place last Thursday at Busan Cinema Center. The virtual space was created by piecing together pictures shot with high-definition, 360-degree panoramic cameras.

Through this service, the user can virtually walk down the red carpet with the click of a mouse while looking around to see who’s there and what the venue looks like. If the user spots someone of interest, clicking on that person’s face reveals basic information and the filmography of the actor or director. 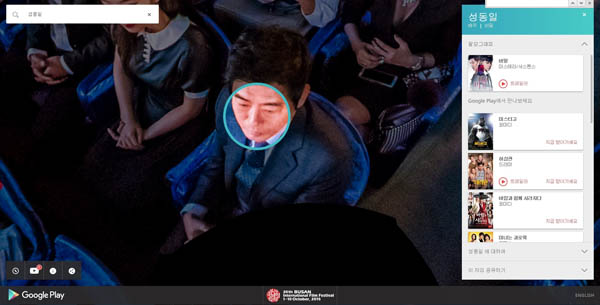 Among other functions, the unique service enables users to virtually experience the opening ceremony of the 20th BIFF, and find out information about participating actors and directors by clicking on their faces. Provided by Google Play

“The opening ceremony can accommodate a limited number of people, and even if they get the ticket, the actors are only visible from a far distance,” said Paul Kim, head of marketing, devices, content and retail for Asia-Pacific at Google.

“We wanted to create a virtual space where online users can actually feel as if they participated in the event and can see who was there,” he added. Kim addressed reporters at a press conference on Saturday at the Google Play booth installed at the BIFF Village, the site of the festival in Busan.

The service will also create a new interface between users and relatively unknown figures in the film scene, according to film director Yoon Seong-ho, who was also at the press event.

“Before, the audience only had access to information given by the camera, which was always shooting the famous figures,” Yoon said. “Now, the users can actively participate in the event in any way they wish.”

“The first row would be filled with superstars and heads of the local government, but users can now browse on their own through the second and third rows as well,” he explained.

This virtual recreation of the opening ceremony is not all that there is on offer for movie fans.

Google Play is also providing a live-streaming service of the sideline events happening at diverse locations outside the BIFF venues. The remaining sessions include an open discussion with French actress Sophie Marceau on Friday.

“‘Google Play Inside BIFF’ is the first service of its kind to be applied to any film festival. It is a comprehensive platform that merges technology from Google’s search function, YouTube’s live-streaming and the contents from Google Play,” Kim said. “It should be able to link movie fans all over the world to BIFF.”

The recorded video of the sideline events, as well as the virtual opening ceremony experience, will be available at inside.biff.kr until Oct. 31.