‘The Intern’ leaps to the top of Korean box office

‘The Intern’ leaps to the top of Korean box office 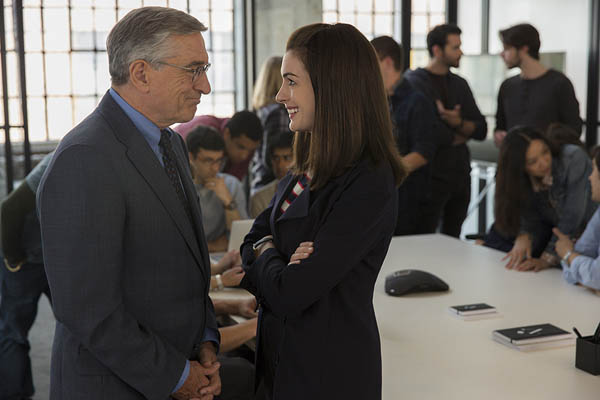 On the back of fast-spreading word-of-mouth popularity, “The Intern,” a feel-good comedy from acclaimed filmmaker Nancy Meyers, soared to first place in the Korean box office for the first weekend of October.

“The Intern” is a workplace comedy starring Anne Hathaway as a young, vibrant CEO of an e-commerce company and Robert De Niro as the intern Ben, who is assigned to work right under the CEO.

The unlikely pair doesn’t click well at first, mostly because Hathaway’s character Jules doesn’t approve of working with a senior. However, Ben’s wisdom collected throughout his 40 years as a devoted company worker makes him shine among his peers, and Jules starts to open up.

In the second place was Lee Joon-ik’s costume drama “The Throne,” which was nominated as this year’s Oscar contender for best foreign language film. It collected 492,528 ticket admissions.

Going into its third weekend in theaters, the film has been seen by 5.6 million moviegoers so far, amassing 43.8 billion won.

CJ Entertainment’s detective comedy “The Accidental Detective” came in third, a step down from last week, attracting 472,538 moviegoers over the weekend and bringing its two-week total to 2 million ticket admissions.

Touting a nice chemistry between the two leading actors - Kwon Sang-woo and Sung Dong-il - this film directed by Kim Joung-hoon follows the story of a wannabe detective who accidently pairs up with a real cop to solve a mysterious serial killing case.

“Veteran,” one of the most successful films of the year, still held fifth place with 82,678 tickets sold. Since it was released on Aug. 5, it has been watched by 13.3 million moviegoers, making 104.6 billion won.

Now, the top three spots are held by Kim Han-min’s period drama “Roaring Currents,” Yoon Je-kyun’s “Ode to My Father” and “Veteran,” all of which were distributed by CJ Entertainment, one of Korea’s major film financiers and distributors.