Chinese delegation to stop in North

Chinese delegation to stop in North 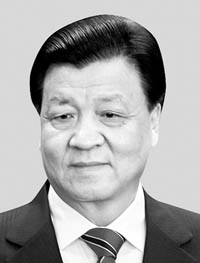 A Chinese delegation headed by a senior member of China’s Communist Party will attend a ceremony commemorating the 70th anniversary of the foundation of North Korea’s ruling Workers’ Party on Oct. 10 in Pyongyang.

Lui Yunshan’s scheduled visit, announced Sunday, came amid uncertainty over whether Pyongyang may fire a long-range rocket to mark the anniversary and has raised speculation that the delegation’s appearance might help to mend ties between the two old allies, whose relations have soured in recent years.

However, the fact that a member of Standing Committee of the Political Bureau of the Communist Party will be dispatched to Pyongyang has raised hopes that the North Korean regime will refrain from stirring trouble in the region, which would undoubtedly unnerve China, its most important ally and trading partner.

The South Korean government declined to say whether Liu’s presence in Pyongyang could persuade the North to forgo a show of force on Saturday. “It is inappropriate to comment [on such a prospect] publicly,” Jeong Joon-hee, a spokesman for the Ministry of Unification, said on Monday.

While Beijing announced that Liu will head the delegation, it did not elaborate on who would accompany him. It is expected that he will meet with North Korean leader Kim Jong-un to discuss bilateral relations and the North’s nuclear programs, which the international community has demanded be shut down.

This will mark the first time a member of the Standing Committee of the China’s ruling party has visited Pyongyang under the leadership of the young Kim, who came to power following his father’s death in December 2011.

Liu’s visit to North Korea comes amid a bolstered alliance between Seoul and Beijing, particularly in their efforts to deal with North Korea.

In August, North Korea threatened to strike at frontline units in the South if Seoul did not accept its demand that all propaganda broadcasts along the border be stopped.

Rising tensions stoked by Pyongyang’s warning came to an end on Aug. 25, after North and South Korea struck a six-point deal following more than 40 hours of talks that Beijing reportedly helped broker.

President Park Geun-hye openly thanked China last month after talks with President Xi Jinping for its role in the realization of the agreement.

With Liu’s visit, it is expected Pyongyang and Beijing will reopen channels between the Communist Party and the Workers’ Party and move on to expand economic and military cooperation.

Yet, if Pyongyang opts to defy international warnings and proceed to fire a long-range rocket this Saturday, ties between the two allies could again be put to the test.

Pyongyang is reportedly preparing a large military parade this weekend. During the procession, it is possible that new weapons and missiles could be unveiled for the first time.