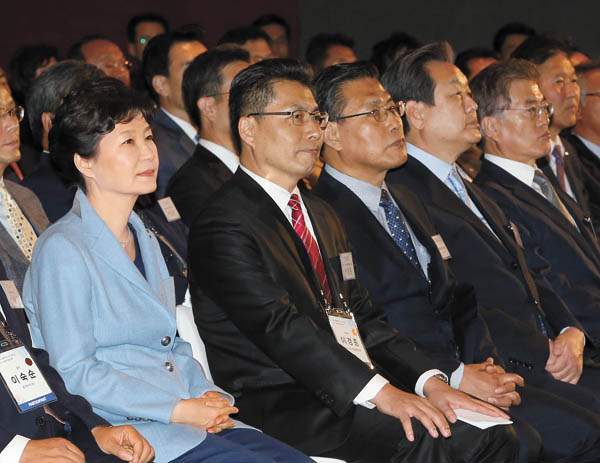 President Park Geun-hye, left, and Saenuri Chairman Kim Moo-sung, fourth from left, attend a ceremony celebrating the Ninth Korean Day held Monday in the Walkerhill Hotel in Gwangjin District, Seoul. Park did not shake hands with Kim when they entered the venue; Kim only nodded at Park as a courtesy. [Joint Press Corps]

The war between the Blue House and the ruling party chairman over how the Saenuri Party will nominate candidates for the upcoming general election ended on Monday after its leader offered a compromise.

Ruling party Chairman Kim Moo-sung took a step back from his initial plan of fielding candidates for the April general election through an open primary, telling the JoongAng Ilbo on Sunday that some candidates may be nominated outside of internal races.

After Kim’s remarks were reported on Monday, the presidential office made clear that it would stay away from the party’s attempt to establish a new nomination precedent.

The Saenuri chairman has been at odds with President Park Geun-hye and her political allies over how the ruling party would nominate candidates for the general election in April. Last month, Kim vowed that all Saenuri candidates would be decided through open primaries and agreed with the opposition party that telephone polls would be implemented.

But while Kim insisted that his plan will improve transparency behind nominations, the Blue House and Park loyalists condemned the Saenuri leader for the arrangement.

In his interview with the JoongAng Ilbo, Kim hinted at a concession, saying that a primary may not be required for all districts.

And though he would not accept any strategic nominations, Kim said he was willing to allow some constituencies to be designated as districts eligible for “priority recommendations,” where the party will select candidates.

“The party scrapped the strategic nomination system when it amended the constitution and regulations last year,” Kim said. “Instead, priority recommendation for certain districts was established in a few exceptional cases. Although I won’t accept demands for strategic nominations, I will agree to priority recommendations for districts stipulated in the party’s constitution and regulations.”

The Saenuri Party amended its constitution in February 2014. Article 103 states that the party can select some constituencies for “priority recommendation.”

The districts are earmarked for candidates who are political minorities, like women and the disabled. The party can also make nominations for districts where no candidate is running or in which applicants are deemed seriously uncompetitive. The central party’s nomination committee will be in charge of naming candidates for those districts, the article says.

Park’s political allies protested Kim’s open primary plan because it gives no room for political maneuvering for the president, as the party would not make strategic nominations. Strategic nominations have been used as a way to guarantee National Assembly seats to certain high-profile figures, as they would land in easy races without internal primaries.

A group of former and current presidential aides are rumored to have political ambitions in the legislative election in April, mostly going after districts in Park’s political strongholds of Daegu and Gyeongsang provinces.

The latest Park aides to leave the Blue House were presidential spokesman Min Kyung-wook and Park Jong-joon, the deputy chief of the Presidential Security Service. They tendered their resignations on Monday and are expected to run in the election.

Only a day after Kim discussed his willingness to bend his open primary plan, a senior Blue House official remarked that he wanted to end speculation over the political ambitions of some of Park’s aides.

Min and Park, he said, are the last presidential aides to quit the Blue House, presumably to run in the April election.

“I am here to tie the loose ends, as there has been a lot of speculation about the stances of the presidential aides,” he said. “No one else will resign [before the general election].”

“It remains unchanged that President Park is neutral toward the general election,” the official said. “It is far from the president’s wish to conflict with the party over nomination rights.”

Another presidential official told the JoongAng Ilbo that other key members of the Park administration who had been rumored to run in districts in Daegu would not be running, including An Chong-bum, senior secretary for the economy.

One source told the JoongAng Ilbo that Park made a direct order to survey her aides’ political aspirations and confirmed their intentions one by one.

However, it remains unclear if the group of lawmakers serving in her cabinet will forego their chances for reelection. Five ministers are sitting Saenuri lawmakers.

In his interview with the JoongAng Ilbo on Sunday, Kim also hinted at giving up his plans to field candidates based solely on public opinion polls.

“If the party’s special panel decides to reflect the party members’ opinions, I can accept that, too,” Kim said.

After conflict broke out between Kim and Park loyalists, Saenuri lawmakers decided to create a special panel to decide nomination rules.

Current Saenuri regulations dictate that party opinion will account for 50 percent of the nomination process, while a public opinion poll will determine the remainder.

While the Blue House attempted to distance itself from Saenuri’s nomination war, Park loyalists nonetheless attacked the ruling party chairman.

During the Supreme Council meeting Monday morning, Rep. Suh Chung-won criticized Kim for using the media to his advantage.

“I don’t understand why he talked about priority recommendation districts,” Suh said. “It gives the wrong impression that the party chairman can manipulate the party’s constitution and regulations the way he wants it.

“This party is not owned by the chairman. He is putting unnecessary emphasis on [who is] right and who is wrong, and worsening the situation. I have been patient, but I won’t forgive anymore.”

The chairman was quick, however, to refute Suh’s criticism. “Because I have experienced the evils of strategic nominations in the past, I am working to scrap the practice,” Kim said. “At the same time, I was explaining my intention that minorities in politics should be given candidacies, and nominations should be made in extremely uncompetitive areas.”