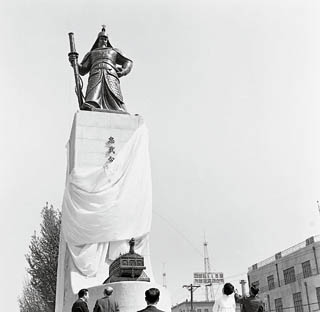 Aug. 15 was the 70th anniversary of Korea’s liberation from Japanese colonial rule. People say per capita income is going to reach $30,000 sometime this year.

It’s impossible for the younger generation to even imagine how impoverished the country was 70 years ago. It was totally devastated after colonization and the Korean War.

At the time of May 16 revolution, or coup, in 1961, per capita income stood at $82, even lower than that of Ghana in Africa. Korea was one of the poorest countries in the world 15 years after liberation, without any technology or resources. 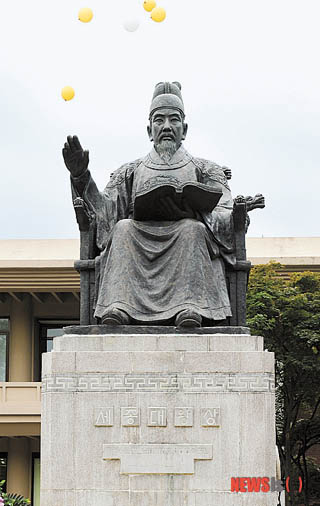 The statue of King Sejong funded by former Prime Minister Kim Jong-pil was built in Deoksu Palace, central Seoul, in 1968 but relocated to King Sejong Memorial Hall in Cheongnyangni, eastern Seoul, in 2012 during renovations. [JoongAng Photo]

What was needed most was will and confidence, more than technology or resources. We needed spirit to make a better country. Reconstruction of the country was the guiding spirit of the time.

President Park Chung Hee told me, “Build a statue of a person most feared and admired by the Japanese in the Sejong-no intersection.”

I chose legendary hero Admiral Yi Sun-sin. He was praised by Marshal-Admiral Heihachiro Togo, who defeated the Russian Baltic fleet to win the Russo-Japanese War, as a god of war and a god of the sea.

Kim Se-jung, a professor of art at Seoul National University, designed the statue and the National Institute of Korean History and other prestigious historians did background research. We also went on field trips to cultural heritages related to Adm. Yi.

The unveiling ceremony of the 18-meter (59-feet) statue of Adm. Yi Sun-sin was held on April 27, 1968. President Park attended the ceremony with First Lady Yuk Young-soo, the National Assembly Speaker and Chief Justice of the Supreme Court.

I reported on the progress of building the statue.

Disclosing that it was the president who paid for the statue, I said, “Let’s learn the spirit of Adm. Yi to protect the country and unite the two Koreas.”

At the time, some critics said the admiral holds a sword with his right hand, which looks like he is surrendering to the enemy. But he could have easily held a sword like that when directing military training. I think they were not creative enough and simply reacting to those who created something first.

Then we put a statue of Great King Sejong in front of the main building of Deoksu Palace in central Seoul. I funded it and Kim Kyung-seng, a professor of sculpture at Ewha Womans University, designed it. In 2012, it was relocated to King Sejong Memorial Hall in Cheongnayngni, eastern Seoul, when the palace went under restoration.

I began to think of public art projects to build statues after I traveled around Europe and the United States. I had to leave Korea for political reasons in 1963 and I was touched to see Nelson’s Column in Trafalgar Square in London and Napoleon’s tomb in Invalides in Paris.

What I found was that people felt a sense of solidarity when they visited statues of heroes and became proud of their country.

In December 1973, when I was the prime minister, I built standing statues of Adm. Yi and King Sejong in the hall of Japanese Governor General’s headquarters in central Seoul. I brought marble from Greece and asked Prof. Kim for designs. They are symbolic figures of the military and governance and I wanted the government to balance those two fields. They were moved to the National Assembly when the building was demolished in 1996.

In 1998, when I served as prime minister for the second time, I tried to carve faces of historic figures -- General Gyebaek, King Sejong, Adm. Yi and Shin Saimdang -- on a cliff along the Baekma River in my hometown of Buyeo, South Chungcheong. I was inspired by the Mount Rushmore National Memorial that has the faces of four former presidents of the United States.

I secured a 2 billion won ($1.7 million) budget and completed foundation work, but the Cultural Heritage Administration opposed the plan claiming it would damage the mountain. There may have been reasons for opposition, but it could have been a great scenic spot by now.

In the 21st century, I could see room for more statues of those who made huge contribution to the country’s economy: Chairman Lee Byung-chull of Samsung and Chairman Chung Ju-yung of Hyundai. Looking back on the long history of this country, their achievements must be remembered. One day, people will look up to statues of the two.

And beyond theirs, I would like to see statues of Dr. Syngman Rhee, founding president of Korea, and President Park for his contribution to the country’s modernization. Only then will the history we should be proud of be complete in Gwanghwamun Square.

For the statues to last, they must be made of quality bronze so that the statue will remain unchanged for the next 1,000 years. Those men’s achievements are worth being praised for 1,000 years.

I believe calligraphy stirs the national spirit as well. People think that the country should be strong. We were colonized by the Japanese because we weren’t strong enough. We’ve become much stronger since Korea was liberated, but we still need more of a sense of unity.

I expressed that in my calligraphy in Ganghwa Island in Incheon, which is close to North Korea. I paid a visit to the Peace Observatory in Cheolsan-ri, which is only 1.8 kilometers, or about a mile, from North Korea. We held a ceremony to name the area Jejeokbong, or a peak that defeated the red enemy. I wrote the name in calligraphy and it’s still kept in a frame and on a memorial stone.

I learned Korean traditional calligraphy in Buyeo from the age of five from Yun Eung-gu, a scholar who was a friend of my father’s. The academy where I learned calligraphy subscribed to a daily newspaper named Kyungsung Ilbo and my classmates and I practiced writing until the entire paper turned black.

Calligraphy is an art and a means of self-discipline and it is an attractive way of delivering your own messages as well.