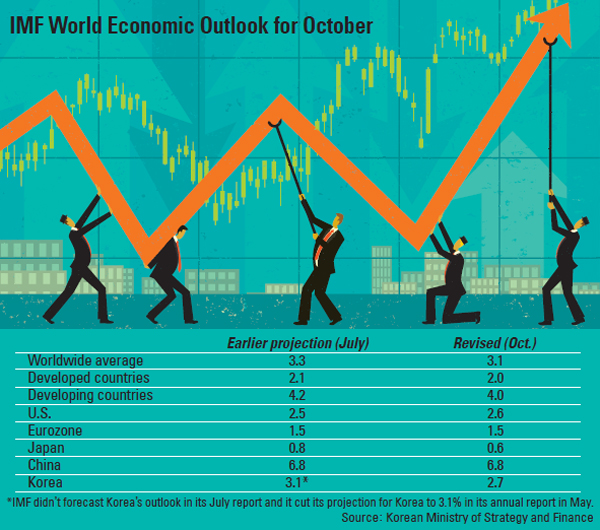 The International Monetary Fund has cut its forecast for Korea’s growth to 2.7 percent in its October report, citing a slowdown in economic activity due to shrinking exports and consumption.

The latest projection is a 1 percent cut in the IMF’s January report, which forecast 3.7 percent growth for Korea this year.

The world economy is expected to expand 3.1 percent at the end of this year, the fund said in its regular report of World Economic Outlook for October 2015, released on Tuesday.

The latest projection is 0.2 percent less than its earlier forecast in July and 0.3 percent down from global growth in 2014.

Slower-than-forecast growth from developed economies and decelerating growth in emerging markets led to the cut in outlook for global growth, the report said.

Developing countries will grow 2.0 percent, also down from 2.1 percent in April, amid cheap global oil prices and continuous expansionary currency policies in the region.

The United States was one of the few countries that saw a forecasted growth, to 2.6 percent from 2.5 percent during the same period. Low energy prices, reduced fiscal drags and momentum in the housing market boosted the hope for growth, the report said.

The eurozone will experience stagnant growth, the report said, without a change in projection of 1.5 percent since July. The weak euro against other currencies and low oil prices will keep a weak potential growth rate.

Although the fund cut its forecast for the Japanese economy to 0.6 percent from 0.8 percent, it says the additional quantitative easing policy of the Japanese central bank and rebounding equities market will lead to a gradual recovery in growth. Emerging markets, however, will advance 4 percent, downgraded from 4.2 percent, due to the slowdown in China’s growth and falling crude oil prices that hit energy-dependent economies.

Several Asian countries, including Korea, Taiwan and other Asean nations, will see economic activities weaken due to sagging exports and consumption.

A sudden fluctuation in property prices, low potential growth and mounting worries over a protracted slowdown of the Chinese economy are among risks that could put downward pressure on global growth, the fund said.

Stimulating the real economy and potential growth rates should be the top priority for every economy, the fund said, through various means.

In case of an increase in the U.S. dollar value against other currencies, emerging markets were cautioned to prepare for a plunge in their currencies’ value and to strengthen their
macroeconomic systems, the fund
advised.