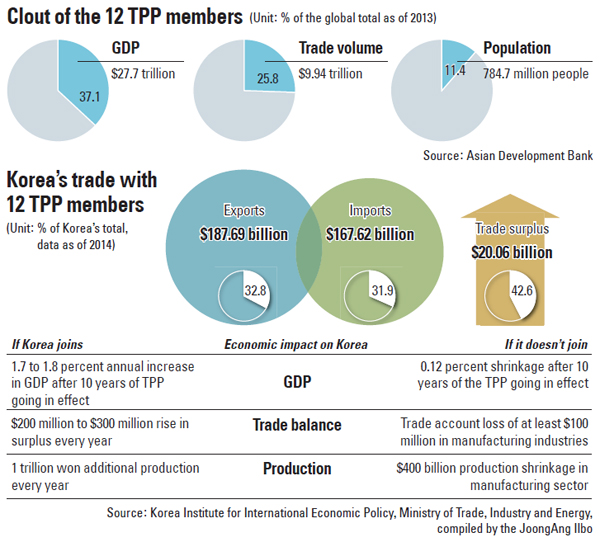 The Korean government suggested it will soon begin the process of applying to join the Trans-Pacific Partnership (TPP), the U.S.-led mega-free trade agreement (FTA) reached among 12 Pacific Rim countries on Monday.

Deputy Prime Minister for the Economy and Finance Minister Choi Kyung-hwan said he will soon make the government’s final decision as to whether or not to join the FTA.

“We will soon announce specific details, including when and how to join, after going through public hearings and other legal procedures [like a local economic impact analysis and getting support from the Assembly],” Choi said at a parliamentary audit session Tuesday morning at the National Assembly in Seoul. “The government has maintained communications with some of the countries involved in the TPP, but I can’t disclose the specifics.”

When asked why Korea did not join earlier, Choi said, “The government at the time [the Lee Myung-bak administration] didn’t really feel the need to join the mega-FTA back in 2008 because Korea already had a bilateral FTA with the United States in progress and was busy working on another bilateral FTA with China.”

When lawmakers criticized the government for having missed the chance to become a member at an audit on Tuesday, Korean Trade Minister Yoon Sang-jick explained, “The basic structure of the TPP is more like an FTA between the U.S. and Japan, which made it difficult for Korea to join the negotiation [after Japan decided to join the TPP negotiation in 2013].”

He said the TPP would not affect the free trade pact that Korea has with the U.S.

“Even when the TPP agreement takes effect two years later, the custom tax cuts from the FTA will continue,” Yoon said. “That is why TPP countries are individually negotiating their own bilateral FTAs [among themselves].”

During a Tuesday press briefing held at the foreign affairs ministry in Seoul, U.S. Deputy Secretary of State Antony Blinken said that Washington would “welcome the opportunity to discuss” Korea becoming the next member of the 12-nation pact. On the mega-trade pact struck Monday, Blinken struck an optimistic note about what it can bring about economically among member states.

“It’s going to make a very important difference going forward both in further opening of trade and investment, and creating more growth and doing it to the highest possible standards,” he said.

The Korea International Trade Association (KITA) released a statement on Tuesday saying that the government should move quickly to join the economic bloc.

“The time has approached now when the Korean government should clarify its stance on whether to join the TPP or not, as the negotiation is done and the 12 founding members are expected to complete discussing remaining issues by end of this year in an effort to sign the deal next year,” the KITA statement read.

“The TPP member countries account for a significant part of Korea’s exports, and the new economic bloc is expected to become a new order in international trade in the future.”

According to a study from the Korea Institute for International Economic and Policy, Korea will lose at least $100 million from its current annual trade surplus if it stays out of the TPP, due to a loss of competitiveness in manufacturing exports.

Growth in the nation’s gross domestic product may also be cut 0.12 percent annually a decade after the TPP goes into effect.

“If Korea fails to join, the bigger issue will be Korea being isolated from the U.S. economic power group,” said Je Hyun-jung, a senior researcher at the Institute for International Trade. “The TPP is about more than just getting rid of tariffs. It’s an expansion of power to contain the growing power of China.

“Korea is a small country for which international trade is vital to its economy,” he said. “It should definitely join the TPP. Korea should maintain a neutral position between China and the U.S. by also working on China-led economic cooperation blocs.”

China has pushed its own free trade economic blocs, like the Regional Comprehensive Economic Partnership (RCEP) and the Free Trade Area of the Asia-Pacific (FTAAP), to rival the American-led TPP.

Je said it won’t be difficult for Korea to join the bloc because Japan and Mexico - the only two TPP members that don’t have bilateral FTAs with Korea - have pushed such FTA negotiations in the past and still want such a free-trade relationship.

“When more than 95 percent of our potential customers live outside our borders, we can’t let countries like China write the rules of the global economy,” U.S. President Barack Obama said in a statement announcing Monday’s deal.

Some local analysts showed concerns that the TPP may hurt Korea’s exports and favor Japan’s.

The nation’s main economic think tank, the Korea Development Institute (KDI), emphasized that the continuing sluggishness in exports may prevent Korea’s economy from recovering even if domestic consumption improves.

Experts from outside the country suggested that the TPP could really hurt Korean manufacturers.

Korea and its automakers were called the biggest losers of the TPP agreement, a Bloomberg commentator wrote on Tuesday, because the United States will eliminate a 2.5 percent tariff on Japanese cars in exchange for Japan partially opening its rice market to the United States.

Bloomberg warned that Korean exporters should watch out for more sensitivity in the United States on currency devaluations.

“Seoul received stronger criticism than Tokyo in the U.S. Treasury’s April report to Congress on currency manipulators,” Bloomberg said on Tuesday. “The problem for the Koreans isn’t what’s in the [TPP] deal, but what isn’t: any proposal, of the sort pushed by U.S. automakers, to penalize countries found to be artificially weakening their currencies.”

At the same time, the TPP could also make it tougher for the Bank of Japan to further stimulate the Japanese economy, a JPMorgan economist told Bloomberg News.