Photo trend reflects a longing for days past

Photo trend reflects a longing for days past 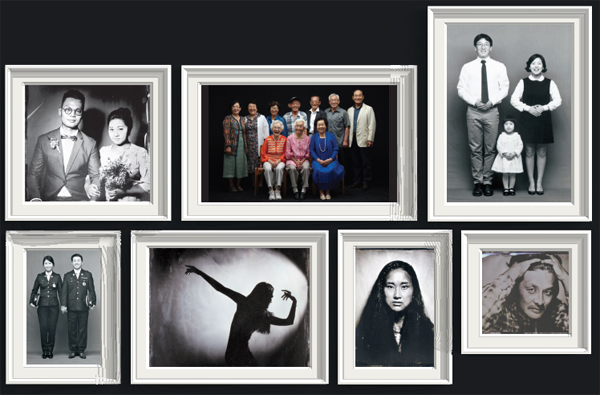 Several photography studios in Seoul specialize in black-and-white photos, as the style is becoming increasingly popular. Provided by Mulnamu Studio and Lighthouse Studio

With a few taps, anyone from a 70-something granny to a preschooler these days can take high-quality photos using their handheld gadgets and share them with friends or online.

In other words, taking and enjoying photos is getting easier every day.

But in an era of digital photography overload, some people still take the time to visit old-fashioned photo studios to capture special moments with black-and-white film.

“With abundant digital photos, black-and-white photos taken by manual film cameras are not something out-of-date anymore,” explained Nho Myung-woo, a professor of sociology at Ajou University. “They are being rediscovered by people in their 20s and 30s.”

This is the case of Kim Ah-young, 31, who often takes black-and-white photos.

“All my photos are colored so it is interesting to see myself in a black-and-white photo,” she said.

Photos taken with manual film cameras can’t be altered with Photoshop, which most consider to be the drawback of black-and-white photography. But enthusiasts like Kim consider it one of its charms.

Noh Hyun-jeong and Seo Byeong-deok, who will tie the knot later this month, decided to go retro by having their wedding photos taken in black-and-white at a studio that only uses film cameras, unlike most couples who opt for digital photo shoots.

And most wedding photo studios in Korea retouch the resulting photos to smooth out imperfections, but not so at this studio.

“We wanted to have photos of us with blemishes on our faces and some fat on our body,” Noh said. “Photos look better if they are retouched but they are not us.”

“And we are happy with our decision because the black-and-white photos have real faces of us,” she added.

Lee Chang-ju, who photographed Noh and Seo at his Lighthouse Studio, said, “All the colors fade away over the course of printing black-and-white photos so you can focus on the subject in the most objective way.”

Black-and-white photos are like the simple combination of rice and soup in Korean cuisine, according to Hwang So-yeon, the author of “The Aria in the Bright Room: Soyeonia’s Photo Note.”

“Colors are like various side dishes: They enchant us but we can’t enjoy them without a bowl of rice,” she explains. “In that sense, black-and-white photos are more appealing than colored photos.”

Son Young-joo, a senior curator at the Museum of Photography in Seoul, defines black-and-white photography as a medium that connects the older and younger generations.

“People in their 20s and 30s do not know much about black-and-white photos but they are interested in it, which is a culture of their parents’ generations,” she said.

The museum opened in 2003 at Bangyi-dong, southeastern Seoul, and is the only museum in town dedicated to photography. 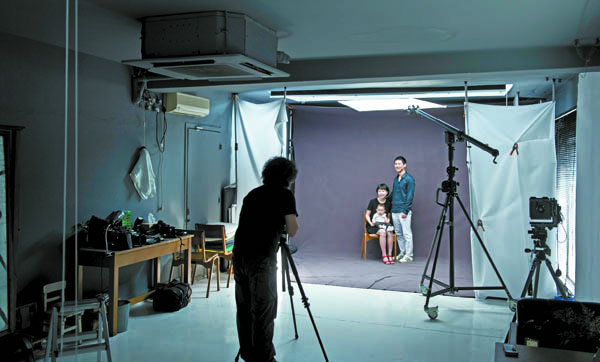 Cho Yong-hun, far right, and Hong Ji-young pose with their son, Kyu-won, for a photo to commemorate his first birthday at Mulnamu Studio.

The popularity of black-and-white photography is in line with the recent popularity of analogue hobbies like calligraphy, coloring books and origami.

“Black-and-white photos are like freshly cooked rice made by your mother,” said Kim Hyun-sik, who runs Mulnamu Studio in Gye-dong, central Seoul, near Bukchon, a neighborhood known for its hanok or traditional Korean houses.

“Although your mother’s rice is not cooked in a fancy pot, it tastes better than rice cooked in an expensive pot,” he explained.

Kim, who used to work as a photographer for a daily newspaper, had the idea of opening a black-and-white photo studio while he was studying the history of the Joseon Dynasty (1392-1910), especially the portrait paintings from the era.

“Back in those days, the most important requirement for a painter was making a realistic portrait as close as possible to a subject,” Kim explained. “I decided to do black-and-white photos because they are highly dependent on one’s printing skills, unlike colored photos.”

The studio, which opened in 2010, even offers photos printed on hanji, or traditional Korean paper.

Studios specializing in black-and-white photography have sprung up in other neighborhoods as well, such as Yeonhui-dong and Ichon-dong, which are known for their historic houses and buildings from the 1970s and ’80s.

Lighthouse Studio in Ichon-dong, central Seoul, opened in August with the slogan of “As You Are.”

The studio, operated by photographers Lee Chang-ju and Lee Gyu-yeol, differentiates itself by offering tintype photographs made using a process of capturing an image on a thin sheet of metals that predates film cameras.

Kim Kyu-hyun opened Yeohui-dong Studio in Yeonhui-dong, western Seoul, because he “wanted to have a photo studio we had at the corner of every neighborhood.”

Inside the studio just looks like the ones of days past. Customers can choose from color or black-and-white photos but the majority prefer the latter, Kim said.

“I kept taking photos with digital cameras, and one day I found myself losing interest in photography,” Kim said. “And that was when I felt like going back to square one, because the first photography I learned was how to take black-and-white photos.”

Prices vary at the studios but the cost of a single black-and-white photo starts from 200,000 won ($171), while most studios offer black-and-white Polaroid photos for about 30,000 won each.

Yeohui-dong Studio also holds classes on how to take and print black-and-white photos. It costs 250,000 won for a month-long course, and the fee includes all the necessities like photo paper and dark room chemicals.