The ‘quiet’ Mayweather speaks his mind

The ‘quiet’ Mayweather speaks his mind 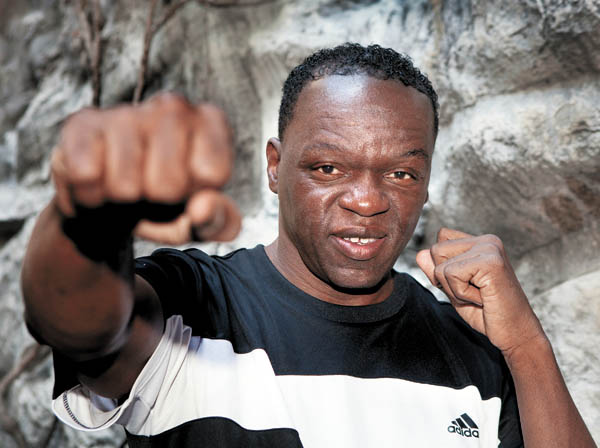 Jeff Mayweather, a world-class boxing trainer and uncle of former five-division world champion Floyd Mayweather Jr., during an interview with the Korea JoongAng Daily on Monday in Seoul. Jeff said he sees no chance that Floyd will return to the ring to rematch Manny Pacquiao, whom Floyd beat by unanimous decision in May. Photo by Park Sang-moon

It’s been nearly a month since Floyd “Money” Mayweather Jr. retired from the ring with a 49-0 record after defeating Andre Berto.

The decision disappointed many boxing fans, who were hoping for a rematch between the 38-year-old American boxer and Manny Pacquiao, after their fight in May - the most expensive in boxing history - turned out to be mostly hype.

But Jeff Mayweather, a boxing trainer who is also the uncle of Floyd Mayweather Jr., says chances are slim that the former five-division world champion will return to the ring.

He also claims a rematch with Pacquiao won’t happen because of the 36-year-old Filipino’s attitude post-fight.

Jeff, the youngest brother of boxers Floyd Mayweather Sr. and former two-division world champion Roger Mayweather, had a three-day visit to Korea over the weekend. The 51-year-old gave lessons to local boxers and attended the “Show Me the KOs” event organized by AK Promotions in Incheon, which featured boxers like three-time former world champion Randall Bailey.

Jeff, a former junior lightweight champion at the International Boxing Organization (IBO), is known as “the quiet Mayweather,” but in an interview with the Korea JoongAng Daily on Monday, the trainer was anything but mum on boxing and issues surrounding his famous nephew, Floyd.

Q. We heard this is your first time visiting Korea. What’s your impression of the country so far?

A. I love it. People are very nice and appreciative of everything. This is an amazing trip for me. I was blessed and fortunate enough to be here. I couldn’t ask for a better trip.

Floyd Mayweather Jr. previously announced his retirement in 2008 after defeating Ricky Hatton but later returned to the ring. Do you think Floyd has really retired this time?

Yes. I think he is really retired. When he fought Ricky Hatton, he probably had $10 million, but he got $800 million now, so that’s the big difference. It’s hard to go back. Once you’ve fought that long and once you make that commitment that [you’re] ready to retire, I think he is going to stand behind it. Most of the time, fighters come back because they need money, but Floyd, he don’t need it.

Manny Pacquiao and his staff have been saying that they want another fight with Floyd. Do you think there will be a rematch?

Of course, they want another fight because they want a payday. But why should there be a rematch? The fight wasn’t even close, and then he [Pacquiao] lied, talking about his shoulder [being] messed up. The reason why he won’t get another fight is because he didn’t man up and give respect. He’s saying he won the fight, but I’ll say, “How did you win the fight? You didn’t even win one round.”

But Pacquiao claimed he was injured. What do you think about that?

He [Pacquiao] claims he had an injury, but never once in the ring did he complain. Do you know how severe it is to have a torn rotator cuff? And he was throwing punches at full speed? I think his injury claim isn’t true. At first, he said that he didn’t need surgery because God healed him. So I think it’s just an excuse ... First of all, he made himself look really bad on the night of the fight rather just saying, “Well, Floyd was the better man tonight.” If he would have said that he probably would get another match because it still would have been the biggest fight in boxing. He won’t get a rematch because he disrespected Floyd.

Some fans think Floyd should have fought a stronger boxer than Andre Berto in his final bout. What do you think?

Don’t matter. No matter who Floyd fights, they will not be happy with it. Because every person he fights, he beats him anyway. So what difference does it make? Who could he choose that everybody would be happy with? No one.

Now that Floyd is retired, who is the pound-for-pound king at this moment? According to BoxRec, Wladimir Klitschko, Gennady “Triple G” Golovkin, Saul “Canelo” Alvarez are the top three, in that order.

First, don’t get me wrong. When Floyd left the sport, he left the sport in good hands. There are lots of young good fighters coming up that can carry the sport. But there are also lots of people who still miss Floyd. He transcended the sport. He took the sport to a higher level. But at the same time, we have young guys like Keith Thurman, Terence Crawford and of course triple, G [Golovkin]. Those guys are a little older, but I think they can carry the sport.

Based on competition, I will probably say Canelo pound for pound. He has fought some named fighters. Golovkin… he hasn’t fought no names. I know he’s got a great record, but he hasn’t fought anybody.

If Golovkin fought against Floyd in super welterweight, who would you pick?

Let’s not fight in super welterweight, let’s fight in the welterweight division. If so, he [Golovkin] would not have a chance. At super welterweight, I don’t know, because the guy comes from middleweight, but coming down to 154 pounds will still be hard for him. But like I said, he has never fought a boxer that is even close to Floyd.

You are a well-known trainer in boxing. Can you name a future world champion among one of your trainees right now? What is special about him?

Kevin Newman. I taught him since he was nine years old. He is probably the second-most gifted fighter in terms of defense in the gym right now. He is still young and getting better. ... He is exciting, good-looking kid, and he can fight. I’ll put it this way. He can handle most of the guys in the gym and he’s only had four fights. Maybe one day, he will fight Golovkin.

You also teach UFC fighters. Is there a difference in teaching MMA fighters?

Basically, it’s pretty much same. But I always ask MMA fighters first because their stance is a little different. Especially in MMA, you’ve got to take downs as opposed to striking. For every guy that I’ve trained, I ask them, “Is there a certain way that you want me to work with you?” and they all say, “No, teach me in boxing way that you know.” So it’s no problem for me. There are lots of MMA fighters that I’ve trained. Roy Nelson, King Mo [Muhammed Lawal] and Ryan Martinez were the three guys that I trained on regular basis.

From your perspective, what’s the difference between Asian boxers and Western boxers? If Asian boxers need to fight better, what is the most urgent and important thing to improve?

From what I saw, I think [Asian boxers] need to be taught defense more. I have watched their fights, and they are very exciting. The reason why they are exciting is because there is no defense. I see more machoism than the kind of things people say regarding Floyd. Floyd is a smart fighter. He is not going to take hits. Fights that I‘ve seen are just give and take. You hit one, then I hit one, too. Skill-wise, they have good skills, but most of the fighters are just warriors.

What did you emphasize to Korean boxers during your lesson over the weekend?

I know I specialize in defense. Anyone can learn the basics of boxing, but defense is hard to learn. But at the same time, if you’ve got somebody who knows what they’re doing, they can make it look real simple. That’s what I was trying to do here, working on defense and working on different combinations.

Is it possible a boxing beginner can become like Floyd through training?

Being Floyd is hard to get. You got to have timing, you got to be focused … you got to do this for whole lot of years. It just doesn’t happen overnight. Floyd has been learning boxing since he was baby. He is just so far ahead. What he does in boxing is automatic, like autopilot. While everyone else thinks in the ring, he makes adjustments. His instinct has taught him.

What is the most important aspect of becoming a top boxer?

Power is one thing that everybody likes. But if you are puncher and in order to land a punch, you got to be in the line of fire... I think defense is the most important asset to me because boxing is very tough sport. Lots of people who come to boxing don’t leave the sport as they came in. But if you have defense, that gives you a chance of being able to walk away healthy.

In Korea, MMA is now more popular than boxing. Is there something that you want to say to Korean boxing fans?

I don’t know why [boxing isn’t popular here], but we need to upgrade boxing over here. Maybe I should come to Korea every year. Floyd may come, you never know. But right now, you got me. I got more personality than Floyd. I just don’t got money (laughs).