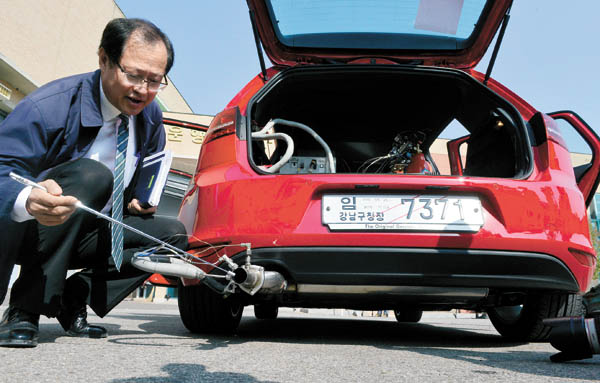 Kim Jung-soo, head of the National Institute of Environmental Research, checks equipment that will be used in calculating gas emissions when Volkswagen diesel cars are tested in Incheon on Tuesday. [NEWSIS]

Volkswagen’s legal problems in Korea related to its rigged software to cheat during emissions tests are growing.

After two Audi owners filed a lawsuit on Sept. 30, 38 additional Volkswagen and Audi owners have joined the case, the law firm representing the plaintiffs, Barun, said on Tuesday.

The new plaintiffs are owners, leasers or people under long-term rental contracts for Audi and Volkswagen cars equipped with a 2.0 TDI, 1.6 TDI or 1.2 TDI diesel engine that were rolled out after 2008.

“In just one week, about 1,000 people called us to get a consultation about the case, and about 500 of them sent documents necessary for a case,” said attorney Ha Jong-sun of Barun. “Of the 500, we have filed a lawsuit against Volkswagen Korea in the Seoul Central District Court today representing 38 people who have finished their paperwork. Since there are more people preparing cases, additional lawsuits will be filed every week for the next few weeks.

“We are not sure how many Volkswagen and Audi owners will join the lawsuit,” Ha said. “But considering that about 120,000 cars [equipped with the software to cheat during emissions tests] were sold in Korea, the number of plaintiffs would be over 10,000 if only 10 percent of the owners join the suit. There are many people who believe it’s hard to beat a giant international automaker in court, but since the Volkswagen Group already admitted the suspicion [that it manipulated vehicles’ electronic control unit to pass emissions tests], the possibility is great for plaintiffs to win.”

Barun said it will file an additional lawsuit soon on behalf of buyers of used Volkswagen and Audi cars to seek 20 million won ($17,000) compensation each. It is also preparing a lawsuit representing owners of other Volkswagen and Audi models beyond the 120,000.

“People in these two groups also have a right to be compensated, as they will see the value of their cars fall even though they haven’t done anything wrong,” Ha said. “We will ask our clients not to allow their cars to be recalled or refitted until the automaker pays compensation, since there is a possibility that the automaker might refuse to pay compensation if a car is fixed before a ruling is made by the court.”

Because of the scandal, Volkswagen’s sales in September dropped by 7.8 percent from a month earlier to 2,901 units, while overall sales of imported cars in Korea rose by 12 percent during the same time to 20,381 units, according to the Korea Automobile Importers and Distributors Association (Kaida) on Tuesday.

“Total sales for imports increased as some new cars were rolled out and due to the lowered consumption tax,” said Yoon Dae-sung, an executive of Kaida.

Volkswagen saw sales of its popular diesel models fall. The Passat 2.0 TDI was the bestselling car in August among imports with 854 units sold, but the figure dropped to 583, which was fourth in terms of sales for the month. The Golf 2.0 TDI hatchback was the third-most popular import in August with 740 units sold, but only 430 units were sold last month and it was ranked 10th.

Sales of diesel cars and German brands in general decreased during September. In August, 72.3 percent of imports sold in the country were diesels, but the figure dropped to 67.8 percent last month while the sales rate for German cars decreased from 74.6 percent to 71 percent.

“Since the entire car industry is under suspicion about diesel cars’ fuel efficiency and polluting problems, people might not view German brands like BMW and Mercedes-Benz in the way they did in the past,” said Ko Gwang-ho, a professor at Ajou Motor College.

Meanwhile, the Ministry of Environment said on Tuesday that cars that were put through a lab test last week passed the country’s standards.

“We conducted tests on Oct. 1 and 2, and all cars met the standards,” said Hong Dong-gon, a spokesman for the ministry. “The road tests started today with a Volkswagen Golf.”