Former NIS chief is released from prison on bail

Former NIS chief is released from prison on bail 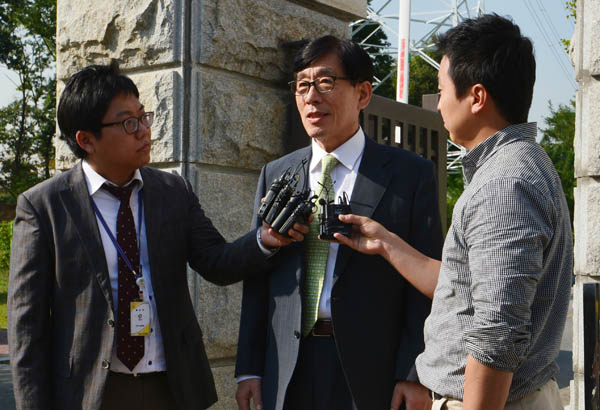 Won Sei-hoon, center, the former chief of the National Intelligence Service, answers questions Tuesday as he leaves the Seoul Detention Center in Euiwang, Gyeonggi. Won was released on bail after eight months in prison. [NEWSIS]

The former chief of the National Intelligence Service (NIS), jailed for meddling in the 2012 presidential election, was released on bail Tuesday after eight months in prison.

Won Sei-hoon was convicted of breaching his duty to be politically neutral when he ordered agents to operate a cyber campaign on the eve of the election to smear President Park Geun-hye’s liberal opponent, Moon Jae-in.

Although he was initially acquitted by a local district court, the Seoul High Court convicted him on Feb. 9. It handed down a three-year prison term and Won was taken into custody at the courtroom.

He appealed the case to the Supreme Court, and the highest court sent the case back to the Seoul High Court in July for a retrial.

While the Supreme Court at the time turned down Won’s request to be released on bail, the Seoul High Court decided to grant his request and released him on bail on Tuesday.

“Both Won and the prosecution need to go over their evidence and arguments, so we decided to grant his wish to be released on bail to protect his defense rights,” the Seoul High Court stated, accepting Won’s argument that he cannot properly prepare his defense behind bars.

In December 2012, the Democratic Party, predecessor to the main opposition New Politics Alliance for Democracy, claimed that government offices, including the NIS, ran a cyber smear campaign against its candidate, Moon. Police fueled the controversy by announcing the results of their initial probe and clearing the spy agency on Dec. 16, three days before the election. Won was later indicted by the prosecution.