Korean lawyers’ lucre isn’t what it used to be

Korean lawyers’ lucre isn’t what it used to be 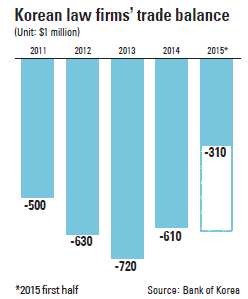 A decade ago, Mr. B joined one of Korea’s largest law firms, and he was confident of his future. He could fight for truth and justice while also doing very well for himself in a country that rewards its best lawyers handsomely.

But it’s not quite working out as Mr. B. imagined. In an era of opening markets and blurred borders, foreign competitors are now poised to snatch most - if not all - of the high-profile cases filed by domestic conglomerates, the most lucrative clients of all.

With less than a year until the local legal service market is flung open to law firms based in the European Union - followed by American firms the following year - local law firms are bracing for a big shift in the balance of power as they struggle to keep domestic companies from seeking foreign lawyers for legal consultations.

A liberalization of the Korean legal services market, agreed to with the European Union in the free trade agreement that went into effect in 2011, will allow foreign law firms to form joint ventures with Korean partners and hire Korean lawyers from March 2016, the last of three transitional stages.

EU-based law firms are currently allowed to partner with Korean firms to jointly handle domestic cases, the same as for U.S. firms. A similar agreement in the Korea-U.S. FTA will allow U.S.-based law firms to reach the final stage in March 2017.

So far, 26 foreign law firms have opened branches in Korea, 21 of which are based in the United States and five in the United Kingdom. These early entrants have joined hands with local law firms to provide legal advice to some of the largest domestic companies, including Samsung C&T and Cheil Industries.

An international partnership was behind a $6.1 billion deal last month, when a consortium led by MBK Partners, a Seoul-based private equity fund, acquired the Korean unit of the discount chain Homeplus, owned by the U.K.-based Tesco.

Korea’s largest buyout was legally engineered by the U.S.-based Cleary Gottlieb Steen & Hamilton and the local Yulchon on MBK Partners’ side, and the U.K.-based Freshfields Bruckhaus Deringer and the local Bae, Kim & Lee on Tesco’s side.

Foreign law firms earn five to 10 times more than their local counterparts in cases they work on, lawyers interviewed for this article said, despite a far heavier workload for the Korean lawyers.

“When you look from the outside, it might look somewhat equal,” a Korean lawyer who specializes in corporate mergers and acquisitions said on condition of anonymity. “But foreign law firms are paid at least five times for than the local firms in consultation fees.”

A Bloomberg report on the domestic mergers and acquisitions market issued on Sunday showed that companies in 945 cases from January to September this year sought legal advice, bringing the total amount of consultation fees to some $85.8 billion. Of the 20 law firms that earned the most, 14 were foreign-based.

Already, Korean law firms earn several hundreds of millions of dollars less than their foreign counterparts in providing legal services here, data from the Bank of Korea indicated. In terms of legal services incoming and outgoing, Korea runs a trade deficit. In the first half of this year, the deficit reached $310 million. The year 2013 saw its highest peak at $720 million.

As a result of the foreign invasion, more and more Korean law firms are finding it hard to survive. Some 30 small to midsize firms shut down last year, and a similar number shut down from January to August this year.

An insider from the Korean Bar Association, who asked not to be identified, said most law firms go out of business when they can’t afford basic expenses of 400 to 500 million won per year.

A Korean lawyer who formerly led the international arbitration team at a local law firm said he recently left the company with four colleagues to set up his own law firm specializing in arbitration and also merger and acquisition deals - a so-called boutique firm.

“I’m trying to prepare for next year’s liberalization of the local legal service market,” he said. “My idea is to provide better, differentiated services to my customers.”

To make up for the financial losses here, some top-brand Korean law firms are opening foreign offices of their own, mostly in Southeast Asian countries including Vietnam, Cambodia, Indonesia, Laos and Myanmar. Law firms Yulchon and Jipyong established their first Moscow branches early this year.