Eyes of the world focus on Incheon spectacular

Eyes of the world focus on Incheon spectacular 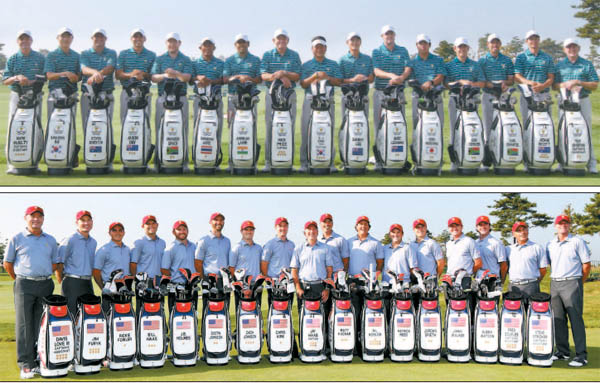 The team photos of the International Team (top) and the United States team in the Presidents Cup. The 11th edition of the biennial event will start on Thursday with five matches of foursome at the Jack Nicklaus Golf Club Korea in Songdo IBD in Incheon. The U.S. leads all time head-to-head at 8-1-1.[NEWSIS]

INCHEON - Korea will be the focus of the golfing world today as some of the best players on the planet prepare to do battle in the 11th Presidents Cup at the Jack Nicklaus Golf Club in Incheon.

This is the first time the biennial event, which runs until Sunday, is taking place in Asia.

Top players in the United States Team will go head-to-head against an International Team, excluding Europe, over the next four days.

“[It] says a lot about the way golf is developing in this region of the world, and I think it was a great choice to come to Korea because of their ability to stage big events, and because both the men’s and women’s side are developing elite players,” said PGA Tour Commissioner Tim Finches. 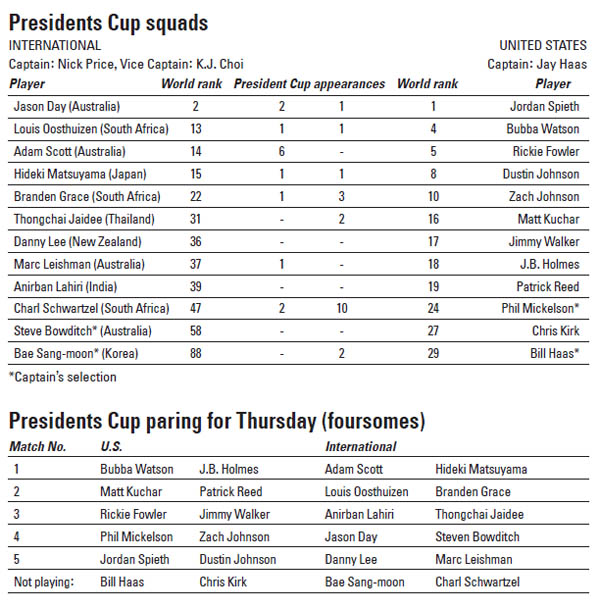 Outside of the U.S., Australia has hosted the event twice (1998, 2011), while South Africa (2003) and Canada (2007) have also hosted the competition. The tournament is expected to be broadcast in 225 countries and territories, reaching more than 1 billion homes in more than 30 different languages.

For Korean golf fans, it will be the best chance to get up close and personal with some of the undisputed stars of the game. Players qualified through their performances over the season while two additional players are chosen by the captain’s recommendations.

The players for the U.S. Team are selected based on their FedEx Cup points, beginning with the 2013 BMW Championship through to the 2015 Deutsche Bank Championship, with points earned in 2015 doubled. For the International Team, the Official World Golf Ranking was used to qualify players.

This year, six of top 10 golfers in the world based on world rankings are playing in Incheon. They include No. 1 Jordan Spieth of the U.S. and No. 2 Jason Day of Australia. In addition, for only the fifth time since 1998, all four major champions are playing.

There is no prize money for winners, although the PGA Tour contributes the money to charities, which are nominated by the players, captains and captains’ assistants from both teams.

The competition is played under the format of foursomes, four-ball and single match play.

In foursomes, which is also called as alternate shot, two team members take turns hitting shots until they finish the hole. In four balls, also known as better ball, teammates each play their own ball and the better score of the two is recorded as that team’s score for the hole.

For this year, the PGA Tour has made changes, reducing the total number of points from 34 to 30. All matches are worth one point each, for a total of 30 points. There are no playoffs, with each side receiving a half point if a four-ball, foursomes or singles match is tied after 18 holes. If the match is tied at the end of singles play, the competition will be deemed a draw and the teams will share the trophy.

History shows the U.S. Team has dominated the Presidents Cup, leading the overall head-to-head record with eight wins, one draw and one loss. Its only loss was in 1998 when the International Team pulled off 20-1/2 to 11-1/2 victory. But ever since a 17 to 17 tie in South Africa in 2003, the Americans have won the last five times, with an average score of 19-15.

At a glance, the U.S. Team looks to be stronger as nine of its 12 players are under No. 20 in world rankings. Even Bill Haas, who is ranked world No. 29, the lowest in the U.S. squad, has higher ranking than seven players on the International Team.

The 12 American golfers have combined 17 wins this season, with No. 1 Spieth collecting five wins alone, while Rickie Fowler, Bubba Watson, Jimmy Walker winning two events. Matt Kocher and Phil Mickelson are the only two golfers in the American squad who haven’t lifted a trophy this year.

For the International Team, only four members -- Jason Day (2), Louis Oosthuizen (13), Adam Scott (14), and Hideki Matsuyama (15) -- are below the top 20 in world rankings. They have a combined 13 wins this season, with Day getting five. Five golfers -- Adam Scott, Hideki Matsuyama, Louis Oosthuizen, Charl Schwartzel, and Marc Leishman -- don’t have a win this season.

Experience wise, the Americans will be familiar in the team competition because they also play the Ryder Cups with Europeans in even-numbered years. In the U.S., only Chris Kirk has never competed in a Presidents Cup or Ryder Cup. For the International Team, five players are rookies to the team competition.

But the U.S. will not be able to take full advantage of utilizing its top players. As the total number of matches is reduced from 34 to 30, this means they need to sit out eight players over three days of team matches.

``You look at our lineup, and it’s hard to sit guys,’’ said the U.S. Team captain Jay Haas.

On the other hand, the change seems to give some favor to the International Team as it can stash its out-of-form players in early foursome and four-ball matches.

“So, with the points changed now, I think the guys are looking forward to this a lot more than any of the previous two or three,” said International Team captain Nick Price on Tuesday. “I think we’ve seen in the past that the Presidents Cup needs more excitement. It needs to be more closely contested.”

Though the core members of the International Team have been those who are from Australia and South Africa, expectations are high for Asian golfers as this is the first Presidents Cup held in Asia. While Thailand’s Thongchai Jaidee and India’s Anirban Lahiri represents their country for the first time, the International side also has Hideki Matsuyama of Japan and Bae Sang-moon who will be representing the host nation despite his military conscription controversy.

Including Incheon-born Danny Lee, who now represents New Zealand and Australia’s Jason Day, whose mother is from Philippines, the International Team is more attractive to fans this time.

“They [Asian players] really want to prove themselves here in Asia and really give it a big push,” said Branden Grace of South Africa for Asian players in the competition. “It’s big key to have them on the team this week.”

“I guess this is a good sign that a lot of Asian players are getting highlighted,” said Bae, who is likely to have his final appearance before doing his military service. “For me as a Korean, I also have this vision that a lot more Korean players will be debuting and will be showcased in some of tournaments.”

Koreans will not see home-grown Bae for the foursome matches today as he has been left out along with Charl Schwartzel. The 29-year-old from Daegu has won the two KPGA Korean Tour events held at the Jack Nicklaus Golf Club.

Bae and Schwartzel practised together on Tuesday for their possible foursome matches, but according to International Team vice captain K.J. Choi, the 31-year-old South African showed vomiting symptoms on the 17th hole and didn’t finish practice.

“I think it’s just some virus that he’s got,” said International Team captain Price. “I felt kind of bad that I had to bench Moon, but I don’t want to split up any of the other teams that played well yesterday.”

Leaving two players wasn’t easy for the U.S. team, which decided to bench Bill Haas and Chris Kirk. Jay Haas, who is Bill’s father, said he is happy with their line up.

“Nothing is going to be given to them, and they understand that,” he said. “They know how golf is.”

Day and compatriot Steven Bowditch, who is rookie to the tournament, challenge Phil Mickelson, who hasn’t missed a President Cup since its inaugural event in 1994, and Zach Johnson.

The U.S. Team especially spent a long time to pick counterparts for the International Team’s Asian duo Anirban Lahiri and Thongchai Jaidee. The Americans eventually came up with Rickie Fowler and Jimmy Walker.

“Skill-wise players here are all at a high level,” said International Team vice captain K.J. Choi. “What’s important is how they are comfortable with each other and how they have been friends together.”

“I think we will play a close match,” said Choi. “If you look at the green, the match will be about who makes the better putt.”