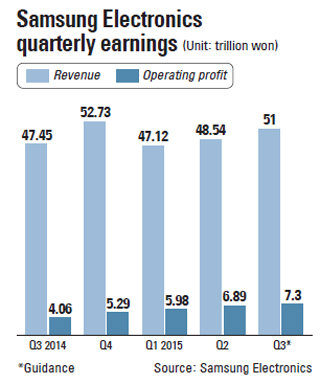 The “earnings surprise” eased concerns that the No. 1 smartphone and TV producer in the world was losing its way. In the previous three months ending in June, the electronics giant had a negative earnings shock mainly from disappointing sales of its flagship Galaxy smartphones.

Revenue for the July-September period was around 51 trillion won, up 7.5 percent from the previous three months, whereas operating profit advanced 5.8 percent over the same period.

Samsung Electronics has made it a rule since 2007 to post earnings estimates in regulatory filings a couple of weeks before formally releasing quarterly results. But detailed results by the business sector are not disclosed.

Thanks to the upbeat performance in the third quarter, shares of Samsung Electronics spiked 8.7 percent to close at 1,251,000 won on Wednesday.

The biggest contributors to the improved earnings appear to be the strengthened U.S. dollar and improved performance of chips and displays, not smartphones.

Samsung is paid in dollars, and the strong U.S. currency pushed profitability upward. The Korean currency stayed in the 1,100 won range per U.S. dollar in the second quarter but weakened to 1,200 won in the third.

The world’s top producer of memory chips saw sustainable growth in DRAM and NAND flash revenue during the July-September period despite a downturn in prices. Large orders for the A9 chip, the main processor of the iPhone 6s, the latest Apple flagship phones also helped improve earnings.

Revising the target share price for Samsung Electronics to 1,560,000 won from 1,430,000 won, Lee Jae-yoon, an analyst at Yuanta Securities, said the operating profit of the semiconductor sector in the third quarter is estimated to have shot up 57 percent year on year.

“Samsung’s [third-quarter] earnings surprise, despite internal and external difficulties, should be highly appreciated,” said Lee Ka-keun, an analyst at KB Investment & Securities. “But the source of the earnings and their direction will be the key determinant of the share price in the future.”

He warned that the hike in Samsung shares seen Wednesday could end up being a “short-term event” if it turns out that the good results owe more to the currency factor than improved competitiveness in the IT and mobile communication division, which oversees smartphones.

Samsung tried to rev up its high-margin premium smartphone business by unveiling the flagship Galaxy Note 5 in August, a month earlier than in previous years. But sales were disappointing.

Competition against Apple’s iPhone 6s and the dollar’s appreciation if interest rates are raised by the U.S. Fed are feared to hurt Samsung’s smartphone business in the last quarter.