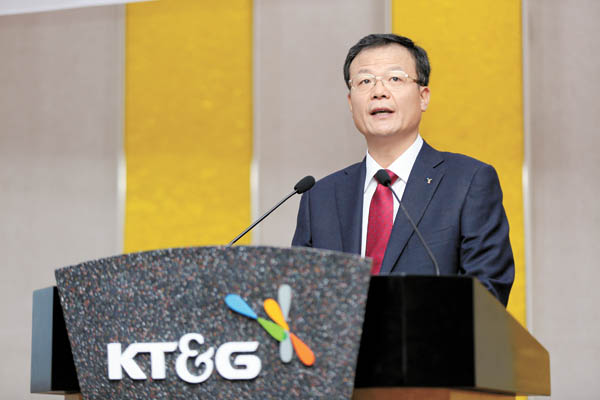 Baek Bok-in, KT&G CEO, at his inaugural speech at the company’s headquarters in Daejeon on Wednesday. Provided by the company

Rebuilding trust in KT&G, Korea’s largest tobacco and ginseng manufacturer, will be the first priority for the company’s new CEO.

Baek Bok-in, the new head of KT&G, said during his inaugural speech on Wednesday, “Our company is currently in the midst of the biggest changes and crisis we have faced in our history.

“We will set our path as a company that is loved by the people and contribute more to the nation’s economic development by further securing our domestic market, while aggressively expanding our overseas businesses under the philosophy of ethical management that will help us leap into the future together.”

He promised an ethical and transparent management, adding that such qualities are necessary in securing the survival of the company as well as its sustainable growth. This promise entails strengthening the expertise as well as independence of the organization.

Baek also promised to restructure the corporate culture of the company to enhance communication within the organization regardless of rank. This includes communication with the public through social volunteer work.

On the business side, he plans to step up the freedom and accountability of employees. He said he will also invest aggressively to help raise the talents of employees and will not hesitate to bring in outside talent to improve the company’s business.

The inauguration of the new CEO comes as the company’s previous CEO, Min Young-jin, is under investigation by the prosecutors’ office for embezzlement and mismanagement. Min stepped down as CEO in late July.

Investigators recently heightened their investigation into the embezzlement issues with a search and seizure operation at the KT&G office in Gangnam District as well as at its cosmetics affiliate. Several other managers are also believed to be under investigation. The investigators have been looking into Baek’s involvement in the creation of a slush fund.

Baek was nominated for the CEO position on Sept. 18. He was the only contender. Shareholders approved Baek as the new CEO on Wednesday.

In the two months between Min’s resignation and Baek’s nomination, KT&G was surrounded by rumors that the government and politicians were trying to influence the selection and hoping to plant an outside CEO.

There was speculation that high-ranking officials from the Finance Ministry could take the CEO post. This was largely because the CEO nomination was changed to allow outside applicants to apply for the job. Since KT&G was privatized in 2002, its CEOs have been selected from within the organization.

Baek joined the company in 1993 and has worked for major departments within the organization, including marketing, global business, production and research and development. He was promoted to vice president in charge of strategic planning.

In 2011, as head of the marketing department, he helped raise the dwindling market share of KT&G’s cigarette business from 58 percent to 62 percent, according to the company.