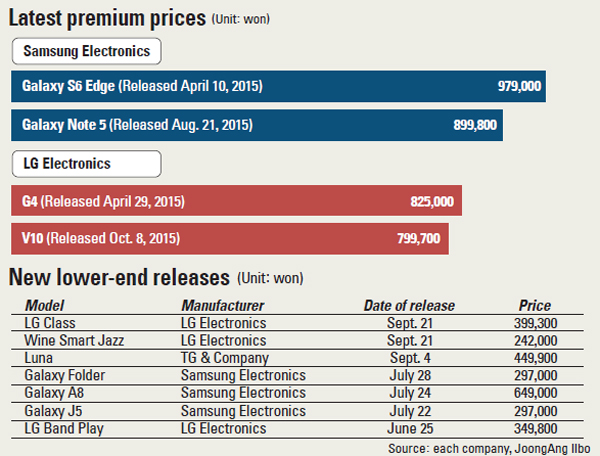 Manufacturers and mobile carriers are expected to take action, as consumers have been having a hard time upgrading their smartphones because of the limitations on subsidies that the government imposed last year.

Under the current law, smartphone subsidies are limited to 330,000 won ($285), up from an initial 300,000 won in April. Yet many consumers have considered the change insignificant in actually motivating them to switch to a new smartphone.

The arrival of Apple’s iPhone 6s is expected to further boost price competition among smartphone manufacturers here in Korea.

In fact, smartphone prices were readjusted at the end of October a year ago when the iPhone 6 was released. Samsung Electronics and LG Electronics lowered the prices of their major smartphones by between 50,000 won and 100,000 won in hopes of securing price competitiveness against Apple’s newest model, while also clearing out their inventories.

Apple’s iPhone 6 is expected to see its price cut as well.

“When the new iPhone 6s is released in the market, customers looking for the iPhone 6 will obviously decrease,” a KT official said.

“And for that reason, we plan on readjusting the price [of the iPhone 6] to clear our inventories.”

Some market experts expect that once premium smartphone prices go down, it will cause a domino effect, where the prices of mid- to low-priced smartphones will also have to be readjusted.

Due to technological developments, phones with similar capabilities could lose their appeal without a competitive price. Customers will choose their product not by the design or the functionality but center their decision on the price.

One such example is the Luna, which has generated unexpected demand for a mid- to low-priced smartphone. The Luna was released at only 400,000 won, about half the price of the Galaxy S6 Edge, although it has capabilities and quality considered almost equivalent to a premium model. The Luna, which was developed and manufactured by TG & Company and exclusively sold by SK Telecom, was released last month. However, its popularity surprised the industry, selling all 100,000 units in its initial sale.

SKT has already begun manufacturing more units, which will go on sale within the month.

In fact, the latest premium models are being released at a lower price then their predecessors. LG Electronics’ V10 has been dubbed a “super-premium phone” thanks to its cutting-edge specs, it but will be sold in the 700,000 won price range. LG’s last premium model, the G4, was priced at around 800,000 won when it was released last April.

The situation is the same for Samsung Electronics, the world’s largest smartphone manufacturer. When the company released the Galaxy Note 5 in August, the price was set in the 800,000 won range. The Note 4, released last year, was originally priced at around 950,000 won, a similar price to the Galaxy S6 Edge released in April.

Competition continues to heat up this month as Google’s Nexus 5X, manufactured by LG Electronics, is scheduled to go on sale on Oct. 20.

The Nexus 5X is already popular among smartphone aficionados, as users will have access to the latest Google services at a relatively cheap price. Chinese smartphone manufacturers like Xiaomi and Huawei are also expected to release mid- to low-priced smartphones with premium-level performances.

The offerings reflect a shift in consumers’ growing preference for cheaper smartphones.

Among the best-sellers in Korea this year, the ratio of premium smartphones with a price of 800,000 won or more has been shrinking, according to a study by Digieco, an economic and management research institute under KT.

The study showed that in 2012, premium phones accounted for 96 percent of the 10 bestselling smartphones. That ratio has dropped to 52 percent this year.

In contrast, budget smartphones - which cost less than 380,000 won - now account for 18 percent of the total, despite previously not even making the top 10.

“The fact that two of the top 10 smartphones that have sold the most are budget smartphones shows that the market is changing, where customers place more emphasis on prices,” said Jung Yeon-seung at the KT research institute.

“The lowering price of smartphones will continue in the future, as it is a global trend interlocked with technological development.”