‘Positives’ of defense laws should be focus

‘Positives’ of defense laws should be focus 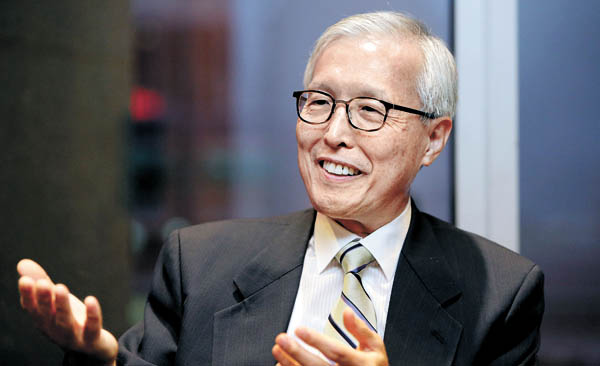 Throughout his career, Shin Kak-soo, 60, the former Korean ambassador to Japan, has taken on a number of roles in the Ministry of Foreign Affairs and held various posts abroad, including deputy permanent representative at the Korean Mission to the United Nations.

Still, he continues to wear many hats. Shin currently oversees the Korea National Diplomatic Academy, works as a researcher at the Seoul National University Institute for Japanese Studies and serves as an adviser to Shin & Kim, a law firm.

The JoongAng Ilbo recently sat down with Shin to discuss Japan’s passage of a set of 11 security bills that would allow its Self-Defense Forces to assist its allies abroad, even without a direct threat.

The move has garnered fierce criticism both inside and outside Japan.

Q. What made it possible for Japan to pass a package of security bills to allow the country to exercise collective self-defense?

A. First, it is important to understand what Japan’s security legislation is. The cabinet of Japanese Prime Minister Shinzo Abe approved the flexible interpretation of its decades-old pacifist constitution in July 2014 to allow Japan to exercise the right to collective self-defense, which was previously forbidden.

In April this year, Abe visited the United States and revised the Guidelines for U.S.-Japan Defense Cooperation. He then vowed to enact the revised Guidelines for U.S.-Japan Defense Cooperation in his country during his speech at the U.S. Congress. And the security bills were one of the changes that Abe promised to make. The bills were passed in the Diet on Sept. 19. It couldn’t declare the right to self-defense before that, due to the pacifist constitution. That rule changed last month.

The latest change reflects Japan’s continuous efforts to achieve state normalization. Japan provided $12 billion worth of financial aid to Iraq during the invasion of Kuwait in the early 1990s, but its effort wasn’t highlighted because Japan couldn’t dispatch any military troops in accordance with its constitution. Based on that experience, Japan realized the need for the right to collective self-defense to properly engage in activities aimed at international peace. Afterward, Japan strived to eliminate that threshold, and that was finally accomplished under the Abe administration.

What influence will Japan’s new security legislation have on U.S.-Japan relations?

Originally, the U.S.-Japan Security Treaty was one-sided. It was structured for the United States to unilaterally help Japan. Based on this new change, however, the relationship has now become reciprocal, as Japan can now dispatch military forces to foreign countries. The United States will benefit from the modified relationship in regard to its strategy to pivot toward Asia. In addition, it will strengthen their partnership but likely cause unrest in Northeast Asia, as Russia and China disapprove of the bills. Preventing a critical crisis on the Korean Peninsula will also become easier, since the U.S. troops dispatched to Korea and Japan are closely connected.

Are there any concerns?

The ultimate goal of the reinforcement of the U.S.-Japan alliance is to counteract China’s emerging military might. China will naturally perceive the move as a threat and will take countermeasures, leading to a more strengthened relationship with Russia. And Russia will welcome that stronger relationship because it is currently facing harsh [economic] sanctions from Western countries, including the United States, for its involvement in the Ukraine crisis. But Japan’s relationships with neighboring countries - Korea and China - have become aggravated since Abe took office. A conservative shift has become more evident, leading to a rise in historical revisionism. If Japan becomes too nationalistic, it will be difficult for it to establish favorable relationships with its neighbors.

Many Koreans have expressed concern that the new security bills will threaten the country.

It’s reasonable to be worried about it. As the Japanese public has shown during the process of passing these security bills, it is in large part not positive about the right to exercise collective self-defense. Around 50 to 55 percent of the public disagree with the bills. In fact, this was the first time that Japanese citizens were collectively spurred to action and demonstrated in the streets since the U.S.-Japan Security Treaty was signed under former Japanese Prime Minister Nobusuke Kishi in 1960. The importance of preventing Japan from regressing because of historical revisionism is undeniable. However, [Korea] shouldn’t get too involved in the issue because it could lead to a rise in [Japanese] nationalism and ultimately help the right wing.

Then how should Korea react?

Korea should try to maximize the positives from Japan’s new security bills while minimizing the side effects. It is essential to judge the reality without bias and try to think pragmatically. Europe consists of numerous powerful countries. On the other hand, China has overwhelming power in Northeast Asia. In terms of economic strength, China’s GDP well exceeds that of Japan by at least two times, and its military power is also rapidly rising. Consequently, the improvement of the U.S.-Japan alliance is surely helpful in maintaining the balance of power. It will also become easier to deter North Korea from further developing its nuclear weapons. But despite these possible benefits, the biggest victim of the U.S.-Japan and China-Russia conflict will be Korea. So it is important for Korea to take the initiative in creating some multilateral security cooperation systems and an organization for dialogue with surrounding countries.

Is there a way for Korea and Japan to cooperate to ensure security on the peninsula?

The easiest method to achieve that goal would be to solve North Korea’s nuclear issues. It would then become possible to cooperate with Japan in handling North Korea’s armed provocations. And when sudden change in North Korea occurs, Korea and Japan would be able to work on the problem together. One important thing to keep in mind, however, is that the Korea-U.S. alliance is the base to achieve all this, so it is especially essential for the U.S. Armed Forces in Korea to properly execute their roles. Core work includes command, control, communication, information, surveillance and reconnaissance, in all of which Korea is highly connected to the United States. Japan and the United States also have a close connection in the field of information, which means it would be possible for Korea and Japan to cooperate in that area. However, it would not be desirable for the United States to form a conflicting composition against China with Korea and Japan. In order to prevent such a composition, Korea should have strategic talks with China.

You mentioned that overreacting to Japan is inappropriate.

One of the biggest factors that Koreans are unhappy about is that Japan has fallen into a historically revisionist pattern since the Abe administration began. Korea is currently trying to solve problems related to Japan’s distorted perceptions, but one thing to keep in mind is that Japan has also been trying, over the past 50 years since it formed diplomatic relations with Korea, to ease those problems, and its efforts should be recognized. It particularly wishes to be acknowledged for its contributions in Asia since the establishment of its pacifist constitution.

Japan’s past mistakes should be severely criticized, but it should also be given credit for the positive contribution it has made. If the inflictor self-examines and apologizes, the victim should show generosity. And if both the inflictor and the victim play their roles, there can be harmony.