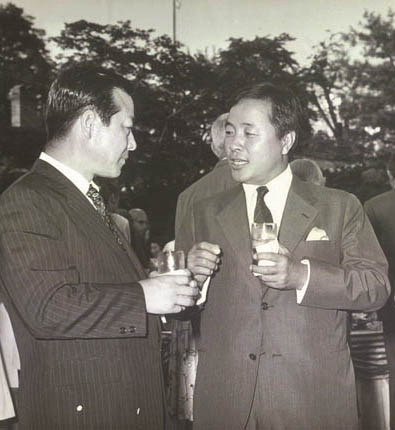 On Oct. 4, 1979, the ruling Democratic Republican Party (DRP) and the Yushin Jeongwuhoi, a quasi-political party consisting of lawmakers recommended by President Park Chung Hee, held an exclusive voting session in the annex at the National Assembly.

On the agenda was the expulsion of Kim Young-sam, the chairman of the main opposition New Democratic Party (NDP).

The session was supposed to be held in the main hall, but National Assembly Speaker Paik Too-chin used his discretionary authority to move the venue, as the main hall was occupied by NDP lawmakers. 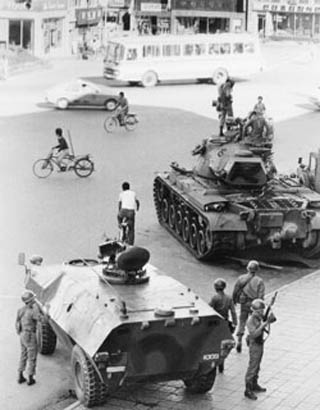 Airborne troops advance into Busan with armored vehicles and tanks on Oct. 18, 1979, after martial law is declared. [JoongAng Photo]

The voting session ended in just 10 minutes, after which Paik announced, “The bill passed with 159 of 159 votes in favor of expulsion.”

However, I voted against it. At the time, I was a five-time lawmaker and the standing adviser for the DRP chairman. I never found out how it became a unanimous agreement.

Kim’s expulsion had been discussed the previous day. On the morning of Oct. 3, when I was staying at my farm in Seosan, South Chungcheong, I got a phone call from the DRP asking me to join an emergency meeting. A luncheon was held at the Plaza Hotel in central Seoul, where Park Jun-kyu, the deputy chairman of the DRP, stated that Kim must be eliminated because it was at the behest of President Park Chung Hee.

But I vehemently opposed the plan.

“There are things that can’t be done, even if it’s the president’s will,” I said.

Another adviser, Rhee Hyo-sang, agreed with me. Yet, most of others were for the expulsion.

The direct reason for Kim’s expulsion was the interview he had given The New York Times on Sept. 16.

“The United States must choose sides, between the government, which is separating itself from the public, and most of the people who yearning for democracy,” he said in the article. “The United States can control President Park only when it wields open and direct pressure on him.”

Park was infuriated. He couldn’t stand that a Korean politician had discussed domestic issues with the foreign media. For Park, a complete nationalist, Kim’s behavior was clearly unacceptable.

In that context, I agreed with Park and spoke with Kim after the interview.

“Why are you mentioning domestic issues to a foreign country?” I asked. “Did you have to speak ill about our president? It’s not right.”

“It didn’t work here,” Kim answered, “so I reiterated the issue in the foreign media.”

Kim once admitted that he was a rather straightforward person. But I also saw him recklessly speak when he became angry. He was stubborn as well, and I see that as the typical attitude of a person who has spent many years in the opposition.

After he was elected president in 1993, he arrested former President Roh Tae-woo and Chun Doo Hwan ? and it was a great feat nobody else could have done. I praise him highly for that.

But he never compromised with others. Politics didn’t work well when he was around because in politics it is necessary to compromise with others. Kim never spoke well of President Park at the National Assembly and he later grew to hate him.

Park often said we should expel him. “A guy like that could ruin the National Assembly,” he would say.

Park hated Kim Dae-jung from the beginning, but he liked Kim Young-sam until about the mid-1970s.

After the fall of Saigon in 1975, Park invited Kim Young-sam, the NDP chairman at the time, to the Blue House. The meeting went well and the two talked for two hours, after which Park escorted him out.

The meeting was confidential, but Blue House spokesman Kim Seong-jin said, “President Park and Kim agreed that the ruling and opposition parties should make a joint effort to deal with this unprecedented crisis.”

The escalating conflict between the ruling and opposition parties seemed to be cooling down. And after Lee Chul-seung became chairman in 1976, politics proceeded smoothly until 1978.

But Kim was elected chairman a second time in May 1979, and his unwavering attitude again began to agitate the relationship between the ruling and opposition parties.

The conflict peaked when employees of the YH Trade factory staged sit-in demonstration in August 1979, at the NDP headquarters in Mapo District, western Seoul, demanding that the order for the company’s shutdown be retracted. Kim and the NDP members decided to shield them from the police.

As the police repressed the demonstration with tear gas, a factory employee fell off the roof and died. Kim was taken to his residence, and lawmakers and reporters were wounded in the process. The incident only deepened the rivalry between him and President Park.

Subsequently, the court nullified Kim’s election as party chairman in September due to the fact that some of the participants had been ineligible to vote in the session. The move was an effort to end his political career.

On the surface, it appeared to be a clash between the ruling and opposition parties, the masterminds behind the scenes were Chief Presidential Security Officer Cha Ji-cheol and Korean Central Intelligence Agency (KCIA) Director Kim Jae-gyu, who were both competing for the president’s confidence.

Kim Young-sam subsequently requested Park step down and that the government be overhauled. The interview with The New York Times was part of that and he lost his seat at the National Assembly.

The National Assembly’s decision to expel Kim only bolstered the negative sentiment against the Yushin Constitution. On Oct. 13, all 66 lawmakers in the NDP tendered their resignations in protest of Kim’s ouster. Three members of the Unification Party did the same.

On Oct. 16, a large-scale demonstration erupted in Busan, Kim’s constituency. It was the beginning of so-called Buma demonstrations. Thousands of people rallied in the streets, demanding the abolishment of the Yushin Constitution ? which gave Park dictatorial power ? and Kim’s reinstatement. Protesters raided newspaper offices, broadcasting headquarters, police stations and government offices, and police patrol cars were set on fire.

It was the first public demonstration since the Yushin Constitution was declared in 1972.

On Oct. 17, as the demonstration grew in scale and intensity, the Blue House held a ceremony to commemorate the seventh anniversary of the declaration of the Yushin Constitution. It was the first time in months that I had seen President Park. He named me senior adviser to the DRP chairman but never called me in to the Blue House. I had nothing to report either.

Most of the participants at the ceremony were DRP and Yushin Jeongwuhoi members. Seven people, including President Park, Paik and I, sat at the head table.

The ceremony went well. Park mainly talked about the agricultural industry, the National Sports Festival and diplomatic relationships. The event was followed by a party.

But the atmosphere at the head table was serious. Home Affairs Minister Koo Ja-choon frequently visited the president to report that the situation in Busan was getting worse.

“I’ve been in Busan all day long, giving directions, but another demonstration is beginning in Masan as well,” Koo added.

I heard about the situation prior to the ceremony and couldn’t eat well because I was so worried. But as senior adviser to the DRP chairman, I couldn’t say anything to Park.

“How are you doing?” the president asked me at the end of the ceremony. “I’ll call you soon enough, so be ready to come to the Blue House.”

It was the last time I saw him alive. I kept waiting for his call, but he never did.

That night, Park held a meeting with his presidential officers and ministers and decided to declare martial law, effective Oct. 18. Airborne troops were deployed with tanks and armored vehicles for repression.

He had different ideas from the KCIA director about Kim Young-sam’s expulsion, affairs related to the NDP and the demonstrations in Busan and Masan.

Every time, Park scolded the intelligence director and adopted Cha’s idea. This was the unstable situation the government saw itself in just a week before Park Chung Hee was assassinated.