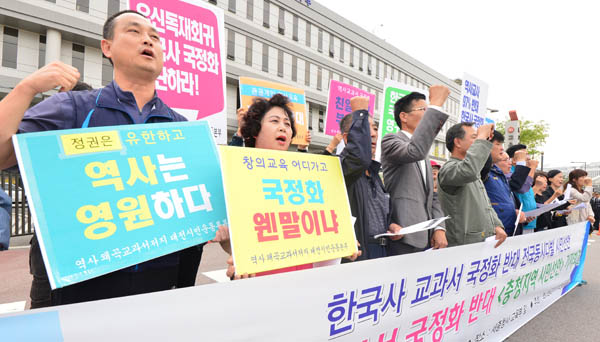 A civic group stages a rally in front of the Education Ministry in Sejong City on Wednesday to protest the government’s plan to take back control over history textbooks.[NEWSIS]

The presidential office and the ruling party continued on Wednesday to push a plan for the government to take control of history textbooks from private publishers, which the opposition vowed to oppose.

“President Park Geun-hye has openly showed concerns about the overall problems in Korean history education,” an official at the Blue House said on Wednesday.

He said Park issued an order to the Ministry of Education February last year to come up with a way to end distortions of historical fact and ideological biases in classrooms, including the development of new history textbooks with balanced views.

The ruling Saenuri Party announced its support for the government to take control over history textbooks for middle and high school students from private publishers.

“Current history textbooks are pushing the students deeper into a sense of defeat and making them citizens who blame everything on the society and the country,” Saenuri Chairman Kim Moo-sung said Wednesday in his speech at the World Korean Community Leaders Convention. “The most important mission for us is guiding the future generation to challenge the world with positive minds and creative thinking and develop Korea into the world’s 10th largest economy. To realize this goal, history textbooks must be published by the government.”

Currently, eight publishers develop and supply Korean history textbooks for middle and high schools. The ruling party complained over the past few years that seven of them were leaning far too left, giving biased history to the nation’s youngsters.

During a Saenuri Party senior leaders’ meeting Wednesday morning, the need to change the current history textbook system was addressed by several participants.

“History textbooks for middle and high schools, regardless of their publishers, are written consistently with an anti-Korean view that denies our history,” Chairman Kim said. “It appears to be an attempt to teach people’s revolution to the students based on a leftist world view.”

Rep. Rhee In-je, a leader of the conservative ruling party, also said the country’s history education must be improved.

“The party and government reviewed various plans to improve history textbooks and reached a tentative conclusion that state control over textbooks is the best way,” the newspaper quoted a source close to the Park administration as saying. “President Park needs to make final approval over the weekend, but there is a high possibility that one single textbook will be published.”

Saenuri officials said a ruling party task force will come up with a plan to provide “consolidated” textbooks to students. “As of now, all eight history textbooks have different perspectives depending on the authors, and this abnormality must be resolved,” Rep. Kang Eun-hee said.

The Ministry of Education tried to stay out of the controversy, saying no final decision was made. “The ruling party is making a strong push, but no decision was made at a consultation between the party and the government,” a ministry official said.

Other officials of the ministry reacted sensitively to the Saenuri Party’s use of the new term “consolidated” textbooks. They pointed out that there are no proper legal guidelines to allow state control over the school syllabus.

While the Blue House and Saenuri leadership are obviously eager to change the current system, some lawmakers of the ruling party expressed concerns.

“Until recently, the party’s policy committee said state-published textbooks are a sensitive issue, and we must approach it carefully,” a second-term lawmaker said. “The leadership is abruptly making a strong push, and I am worried.”

The main opposition New Politics Alliance for Democracy (NPAD) condemned the administration and ruling party’s plan and vowed to stop it. “This is an attempt to go back to the era of dictatorship,” NPAD Chairman Moon Jae-in said on Wednesday.

“The government and the Saenuri Party said they will put all their efforts to revive the economy, but they are actually using all their power to push a state-published history textbook,” Moon said. “They are going beyond beautifying Japanese collaborators and dictatorship, and the descendants of Japanese collaborators and a dictator are trying to justify the acts of their ancestors.”

“Nothing will change by concealing and whitewashing the past,” Moon said, likening the plan to those carried out by Nazi Germany, Imperial Japan, the administration of Park Chung Hee and today’s North Korea. “The state-written textbook system was adopted in a totalitarian country,” Moon said. “No normal country uses it.”

Rep. Yoo Ki-hong said Saenuri Chairman Kim and President Park are trying to introduce state-written textbooks because they want to cover up their fathers’ roles during the Japanese colonial period. He called Park a daughter of Manchukuo Imperial Army Lt. Masao Takagi, the Japanese name the late President Park Chung Hee used during Korea’s rule under Japan, and Kim a son of a Japanese collaborator.

“This is a dirty attempt to pollute the future voters,” he said. “We must counter it at the party level.”

The NPAD adopted a statement sponsored by all its lawmakers on Wednesday to urge the Park government to stop the plan.

State control over Korean history textbooks was first introduced under the military rule of Park Chung Hee in 1974 and ended in 2010. The controversy over the current system, in which schools choose from a range of textbooks approved by the Education Ministry, started in 2013 as the ministry ordered all eight publishers to make corrections even after the materials passed the initial screening by the state-run National Institute of Korean History.

While Kyohak Publishing Company - criticized for its conservative, right-wing biases - agreed to make all the changes, authors of the other seven refused to accept the recommendations and revised their materials under their own revision plans. The controversy prompted the government and ruling party to reconsider the current system.