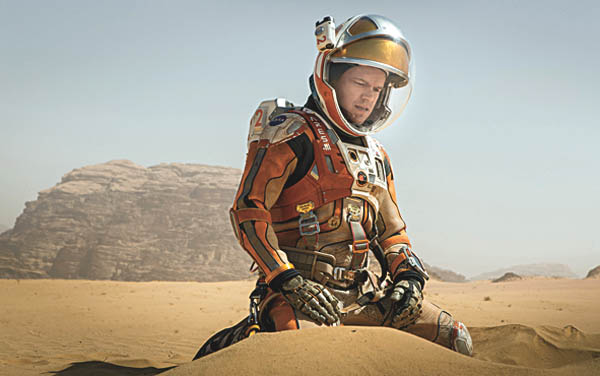 A manned mission to Mars goes awry when one of the astronauts, Mark Watney (Matt Damon) disappears due to a severe storm. With no trace of Watney’s body to be found, Commander Melissa Lewis (Jessica Chastain) has no option other than to pronounce him dead and leave the planet with the remaining crew members.

It turns out that Watney survived the storm, but now he’s stranded and alone. At first, the odds are against his survival: While it would take four years for the next mission to arrive, Watney’s food supplies will only last 50 days. With everything up in the air about his survival, Watney has to rely on his botanic knowledge, meticulous scientific calculations and, above all, undying hope in order to make it home.

Despite his character’s life at stake and the danger he’s in, Damon successfully plays his role with a sense of humor and wit that keep the movie from being a typical, jarring space-survival movie. Plus, with the recent discovery of water on Mars right before the movie’s release, “The Martian” is the perfect way to satisfy newly sparked interest in the possibilities of living on a planet far - but not too far - from Earth. 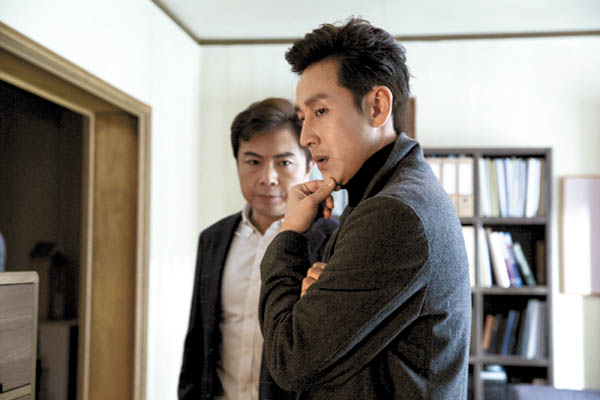 Could one letter really change someone’s course in life? Maybe. But what if it was written by the one and only John Lennon? Certainly, says the film “Danny Collins,” which is based on the real story of the title character.

Played by the legendary American actor Al Pacino, Danny Collins enjoys the life of a celebrated singer: always on the road, he continuously holds concerts where he plays his crowd-pleasing hits.

One day, his manager (Christopher Plummer) shows him a letter John Lennon wrote to Collins in 1971 but was undiscovered until now. As Collins reads the advice in the letter, like “stay true to yourself” and “stay true to your music,” he becomes determined to change his ways. He starts off by canceling the rest of his tour, instead flying back to New Jersey to reunite with his son, whom he hadn’t seen in a while. During this break, Collins tries writing his own songs, which he hadn’t done for many years. Certain universal themes in the film, such as self-reflection, soul-searching and the desire for redemption, can ring true for anyone in the audience. Pacino’s performance is the cherry on top to this guaranteed crowd-pleaser, taking a somewhat predictable film to a whole new level.

Meet Byun Ho-sung (Lee Sun-kyun), a first-rate lawyer who has never failed to win. Give him any case and Byun can spin a story that favors his client - regardless of how true that story might be.

Then comes the case of a college girl’s murder. With no witness or body as evidence against the alleged murderer, Byun has no trouble with arguing for his client in court.

But right when Byun is about to win the case on the last day of the trial, the suspect himself suddenly confesses his crime. As his reputation and ego are damaged, Byun is fueled with the urge to dig deeper into the case.

Little does he know that he would discover the case is linked to a series of other murder cases, all related to a pharmaceutical company’s corruption.

The question is, will anyone actually believe him after the disaster at the last trial?

Everyone knows the story of Peter Pan and Neverland. But how did Peter end up there in the first place? “Pan,” a new fantasy-adventure film, offers its take on this mystery.

Peter is a mischievous 12-year-old boy who can only get through his bleak days at the orphanage with his rebellious antics. One day, Peter stumbles upon a letter written many years ago by his mother in which she enigmatically alludes to reuniting “in this world - or another.” Soon after, in the middle of one night, a hoard of flying pirates invades the orphanage and whisks away Peter and his playmates to Neverland, where Peter’s destiny awaits - to discover the true meaning behind his mother’s disappearance, to meet new mates like the warrior Tiger Lily and James Hook, to defeat pirate Blackbeard, and ultimately save Neverland. 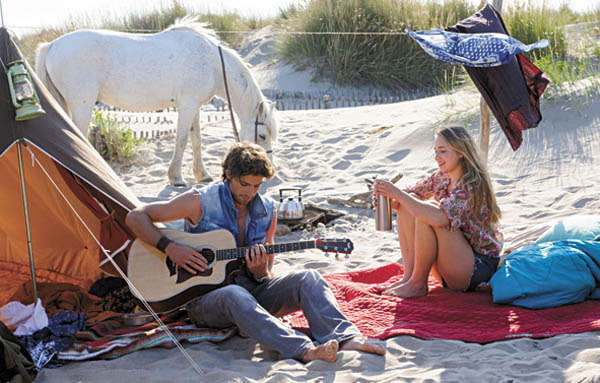 Created by the same studio of the Harry Potter series, Warner Bros. Pictures, this spin-off of the timeless tale will surely cast a spell on fantasy fans in particular. And if that’s not enticing enough, just wait to get hooked by the performance of the all-star cast, featuring Rooney Mara as Tiger Lilly, Garrett Hedlund as James Hook and Hugh Jackman as Blackbeard, as well as Levi Miller, who is making his debut role as Peter.

A family reunion under the warm summer sun in southern France - what could possibly go wrong? For three siblings Lea (Chloe Jouannet), Adrian (Hugo Dessioux) and their deaf, mute brother Theo (Lukas Pellisier), the answer is: just about everything.

The trio are begrudgingly sent to visit a bucolic olive farm in the south of France to meet their maternal grandfather, Paul “Oliveron” (Jean Reno), whom they couldn’t meet before due to family drama.

On top of that, their parents announce their divorce to the children. In less than 24 hours, their father leaves the house.

Lea, Adrian and Theo are left to fend for themselves against Paul and his wife.

Paul, a grumpy senior used to his serene, rural lifestyle, finds it overwhelmingly hard to keep up with his tech savvy metropolitan grandchildren. Needless to say, tensions rise between the two generations as manners, morals and culture collide.

Though some have criticized the film for containing some overly sentimental and cliche moments, viewers can nonetheless enjoy and take solace on themes of intergenerational conflict and dislocation explored.

Now, the tables have turned: This time, she is Jules Ostin, the young, sexy, powerful CEO of a fashion e-commerce company. And, as part of an agreement with a community outreach program, Jules has to put up with her new intern: a recently retired business owner and widower, Ben Whittaker (Robert De Niro). Luckily, Ben gets long with his younger co-workers, and it doesn’t take long before he becomes popular at the office. As Jules warms up to Ben’s charisma and wit, the two begin to develop a close friendship.

Nancy Meyers is a prominent film director known for numerous mega-hit comedy flicks such as “The Parent Trap” (1998), “Something’s Gotta Give” (2003) and “It’s Complicated” (2009). Meyers showcases once again her knack for attracting a large audience with just the right balance of wit, humor and sentimentality.