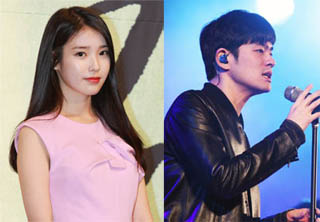 An iconic indie musician has stolen the heart of top singer-songwriter IU.

According to an exclusive report on Thursday by local online entertainment news service Dispatch, IU, 22, and Chang Ki-ha, 33, the frontman of the indie band Chang Kiha and the Faces, are dating.

Dispatch also revealed a series of paparazzi photos in which the two singers stopped by each other’s houses between their schedules.

IU uploaded a post on her official fan community after the news broke, writing: “We have been seeing each other for two years.

“We first met through a radio show, and I fell in love with him at first sight. I’ve learned so much from him, and we’re seeing each other just like any other ordinary couple.”

The singer was named the No. 1 Singer of the Year in 2014 in a survey conducted by Gallup Korea. The poll was conducted among 2,774 people between the ages of 13 and 59. IU is currently working on her new album.