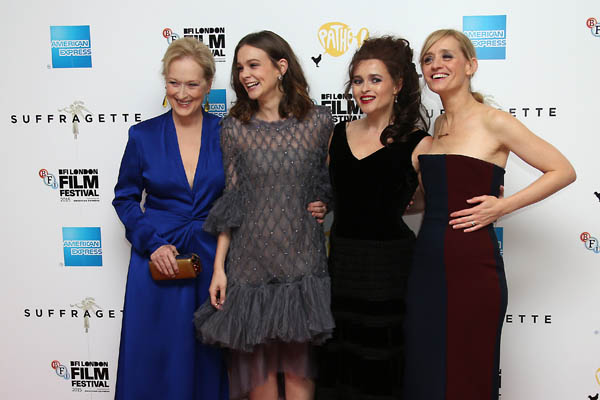 From left, Meryl Streep, Helena Bonham Carter, Anne-Marie Duff and Carey Mulligan pose for photographers on Wednesday upon their arrival at the premiere of the film “Suffragette,” which is also the opening gala of the London film festival in London. The festival runs from Oct. 7 until Oct. 18. [AP/NEWSIS]

LONDON - The London Film Festival opened Wednesday with “Suffragette,’’ the story of British women who fought for the right to vote - a milestone on a journey to equality that many believe is still unfinished.

In an echo of the suffragettes’ direct-action tactics, about a dozen protesters from anti-domestic violence group Sisters Uncut got past barriers and lied down on the red carpet at the film’s glitzy festival premiere.

The group carried signs saying “Dead Women Can’t Vote,’’ and said on Twitter they were continuing the suffragettes’ struggle for women’s equality

“‘Suffragette’ is a film directed by British women about British women who changed the course of history,’’ said festival director Clare Stewart.

Stewart said its selection as the opener signals the London Film Festival’s desire to ask “what can we be doing to break down the barriers for women directors and how can we be ensuring that the debate is front and center for the film industry?’’

In contrast to Cannes, which has been criticized for choosing few works by female filmmakers, 46 of the 240 features in the London lineup are by women, including Deepa Mehta’s Indian-Canadian gangster movie “Beeba Boys’’ and Ondi Timoner’s Russell Brand documentary “Brand: A Second Coming.’’

Stewart said the figure “sounds fantastic when you say it like that. And then you realize it’s still only 20 percent of the program.’’

Festival organizers have also invited actress Geena Davis, founder of an institute on gender in media, to host a symposium. And Cate Blanchett - star of two festival entries, the lesbian romance “Carol’’ and the journalism drama “Truth’’ - will receive the British Film Institute Fellowship, a career honor.

Founded in 1957 to show the best of the year’s world cinema to a British audience, the London Film Festival has boosted its profile in recent years with bigger movies, more glittering stars and prizes to boost emerging awards-season contenders.

On Oct. 17, a jury led by Polish director Pawel Pawlikowski will award the prize for best film from a list of nominees that includes Cary Fukunaga’s child-soldier saga “Beasts of No Nation’’ and Laszlo Nemes’ searing Holocaust drama “Son of Saul.’’